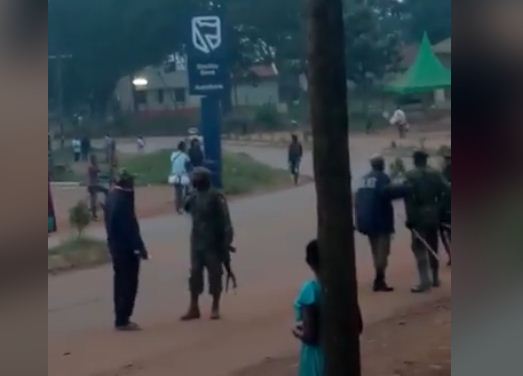 Uganda People’s Defence Forces (UPDF) and Local Defence Unit (LDU) officers who are implicated in the roughing up of Mityana District LCV Chairman Mr Joseph Luzige, have been arrested.

Mr Luzige questioned why the soldiers were beating up a sick woman who was being carried on a boda-boda. The woman was beaten for flouting presidential directives peddled at curbing the spread of covid-19.

According to UPDF spokesperson Brig Richard Karemire, the Chief of Defence Forces (CDF) Gen David Muhoozi has sent a team of senior leaders that include; Maj Gen Sam Kavuma, the Deputy Commander Land Force (D/CLF), Maj Gen Sam Kawaga, first Division Commander and Maj Gen Henry Masiko the Chief of Political Commissar (CPC) to Mityana to make an on-spot assessment and confer with both the district leaders and the district security committee.

LDUs rough up Mityana district LC5 Chairman Joseph Luzige for asking them why they were beating a sick woman who was on a boda-boda. pic.twitter.com/Z6Z4itfoM5

Brig Karemire said the incident no doubt has attracted a lot of attention from the members of the public and the leaders in Mityana district and beyond. The UPDF regrets this gross act of indiscipline that is not characteristic of the UPDF as a people’s army.”

He said discipline remains a core value and bedrock on which the UPDF was founded. Anyone who deviates from this will always be punished according to the established laws. “We therefore strongly condemn this act meted out against one of our senior civilian leaders.”

“The UPDF wishes to reiterate its full commitment and loyalty to the people of Uganda and will always remain subordinate to the civilian authority as provided for under Article 208 of the Constitution.” He said adding that there is no need to lose heart over such incidents.

Currently six UPDF and LDU soldiers have been arrested and prosecuted over inhuman acts of descending on civilians as they enforce presidential directives in line with stopping the spread of Covid-19.