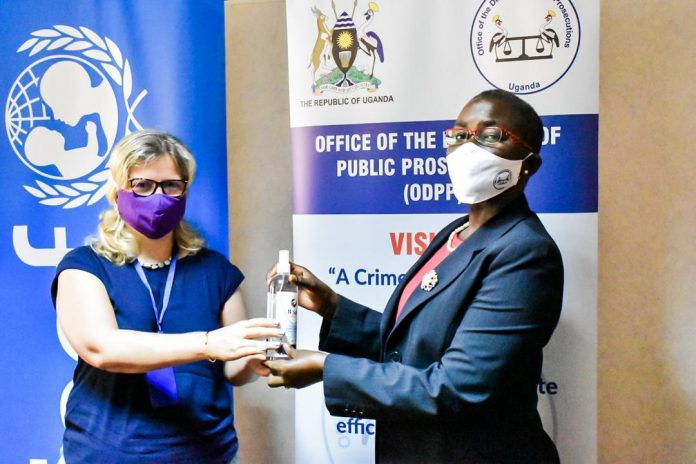 The Office of the Director of Public Prosecutions (ODPP) has received Personal Protective Equipment (PPE) to facilitate the prosecution of child-related cases, from UNICEF.

This took place in a meeting that was held in the ODPP, chaired by the Director of Public Prosecutions (DPP), Jane Frances Abodo. The Representative of UNICEF, Ms. Laura Fragiacomo handed over the PPE to the DPP.

Ms. Samali Wakooli, Assistant Director of Public Prosecutions and Head, Department of Gender, Children and Sexual Offences in the ODPP said the ODPP had partnered with UNICEF to augment the prosecution of child-related cases. “The Handbook on Prosecuting Child-related Cases in Uganda, one of the outcomes of the partnership was being used to train Prosecutors,” she said.

Mr. Vincent Wagona, the Deputy Director of Public Prosecutions, Management and Support Services thanked UNICEF for the partnership, collaboration and cooperation. He promised that the resources would be properly utilized.

The Representative of UNICEF, Ms. Laura Fragiacomo noted that UNICEF and the ODPP had worked closely for over nine years to ensure that children in contact with the law and children in conflict with the law are adequately supported through criminal judicial proceedings in line with the Convention of the Rights of the Child.

She said they had seen tremendous improvement within the ODPP enhancing the capacity of Prosecutors through the Handbook on Prosecuting Child-related Cases in Uganda, initiating child friendly rooms, using anatomic dolls during hearing of children cases; as commitment to ensuring that children realize justice in a friendly process and environment.

In addition, she said COVID 19 had exacerbated significant increase in protection risks for children manifesting in increased incidences of violence against children and others being locked down with their perpetrators in homes. Moreover, the operations of the justice system were drastically reduced since justice actors were not considered critical.

Ms. Laura Fragiacomo commended the ODPP for resuming full operations to ensure that the justice system remains functional, especially for taking part in the ongoing children sessions. She encouraged the ODPP to always pursue child friendly means to ensure justice for children. She said the supply of the PPE was to ensure that the staff within the ODPP safeguard themselves as they continue to pursue the interests of children in Uganda.

The DPP thanked UNICEF for their good working relationship with the ODPP and financially supporting the ODPP executing its mandate towards juvenile justice. She said during the Covid-19 pandemic, the ODPP had been constrained in availing services to children among other vulnerable people.

She pointed out the importance of ensuring the safety of staff while they serve the people. She made reference to the ongoing sessions at the Naguru Remand Home where the Prosecutors have to appear to handle cases of children in conflict with the law, and thanked UNICEF for quickly coming to the rescue of the Prosecutors by providing the PPE.