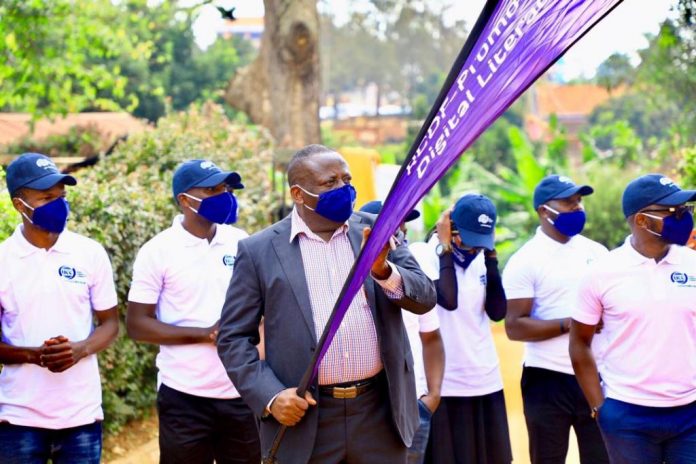 The campaign targeting informal business actors in their workspaces was conducted in February this year. It had covered parts of Western and Northern Uganda just before the onset of COVID-19 lockdown at the end of March.

The outreach teams head out to Eastern and North-Eastern Uganda. The digital skills enhancement exercises will be carried out in open-air markets in the towns of Busia, Tororo, Mbale, Kumi, Kabong, Kotido, Moroto, Abim and Nakapiripirit.

Flagging off the teams at Ntinda in Kampala, the Director Rural Communications Development Fund (RCDF) Nyombi Thembo pointed out that the COVID-19 pandemic has made digital literacy more critical for the informal sector today than it was yesterday.

UCC through RCDF, Mr. Thembo said, is committed to its three-year goal of equipping over one million informal sector people with the digital literacy skills they need to boost their business and improve their daily lives.

UCC is mandated by Section 5(1) (S) of the Uganda Communications Act 2013 to promote universal access to communication services and to improve access to ICT services in Uganda.

In line with this mandate, RCDF has prioritised extending digital literacy skills to various informal sector groups in rural areas across the country.

According to the Uganda Bureau of Statistics (UBOS), the informal economy contributed 50% of Uganda’s GDP in 2014.

Up to 80 per cent of the labor force worked in this informal economy, and most of this population was essentially ‘underemployed’, with most of the workers not earning enough to escape poverty.

The informal economy in Uganda is characterised by jobs and business activities that are often not registered. These include market vendors, fishermen, subsistence farmers, mechanics and boda-boda cyclists, among others.