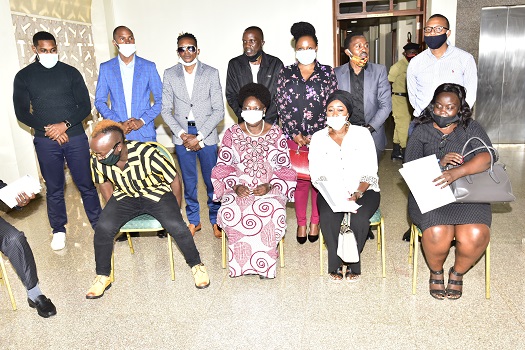 Performing artists under the National Union of Creative Performing Artists and Allied Workers have reached out to Parliament over the recently issued regulations to their industry terming them as draconian.

The group led by musician, Halima Namakula, met the Speaker of Parliament, Rebecca Kadaga, and argued that the new regulations will encumber the activities of the entertainment industry.

The meeting was held at Parliament Building on Tuesday 4 August 2020.

The Stage Plays and Entertainment Rules 2019 issued by Uganda Communications Commission (UCC) requires that all content produced for film, stage and music content must be scrutinized by the Commission in order to maintain standards in the industry.

The petitioners said that the rules are a reincarnation of the Colonial Stage Plays and Public Entertainment Act 1943, which was aimed at curtailing the performing artists agitating for independence.

“The Constitution provides us the right to practice our profession for economic gain without any bias, be it political or not; so we should be allowed to practice freely,” said Hannington Bujjingo a comedian.

He said that the entertainment industry needed an umbrella body that understands its operations and to which issues of concern are addressed.

Speaking as a patron, Hon. Charles Bakkabulindi (NRM, Workers), said that Government needed to invest in the entertainment industry in order to earn from it.

“I reiterate the importance of having a government authority to help deal with the issues that performing artists face every day,” he said.

Alex Muhangi, another member and comedian said that it is unjust and unfair for the government to go through UCC to micro-manage everything artists do.

Speaker Kadaga said that the regulations regarding the Government censorship of performing arts products were passed without much scrutiny but can still be revisited for review.

“It is unfortunate that we did not thoroughly internalize these regulations when they are being passed. However, I will instruct the Committee of ICT to handle the matter and provide public hearings to your union,” she said.

Kadaga also said that it is important for the entertainment industry to have a ministry through which their issues will be addressed and present to the Cabinet. She promised to ask the President to consider appointing a ministry to the task.