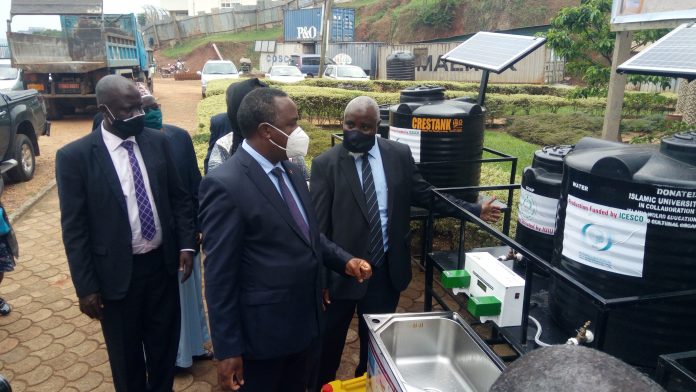 The Islamic University in Uganda –IUIU  has launched five innovations in response to the #Covid-19 pandemic to limit it from being further spread.

The launched innovations include the automatic hands-free dispenser (30 sets), plastic face shields and cloth mask made by the IUIU motion analysis research laboratory(MARL), instant hand sanitizer (1030 liters) by the department of pharmacy of the IUIU Habib medical school and online learning platform made by the IUIU team at the main campus Mbale.

The automatic hands-free dispenser uses solar energy but it can also be connected to electricity and a set of it costs them around Shs1.5 million to have it in place.

This technology of the automatic hands-free dispenser dispenses soap, gives you time of about 10 seconds to rub before it can give you rinsing water. Every time the system gets used, it can be monitored under the two parameters of performance in terms of operations and how many people are using it at a time.

During the launch at the University branch in Kibuli Kampala, the University Rector, Dr. Ahmed Kawesa Ssengendo explains that the realization of how devastating the pandemic can be has motivated a team of students and staff of IUIU to think of creative ways to make sure that they also limit the spread of the virus.

Dr. Ssengendo said they have other Innovations they have made that include automatic greenhouse for growing plants, wearable jackets for the blind and elderly, automatic floor cleaner and pot-hole mapping Robot.

He calls upon all Ugandans to work innovatively to contribute in fighting the virus. Adding that “We cannot just hope that #Covid-19 will go away without contributing to fighting it”

The Innovations has been funded by Islamic World Education, Scientific and cultural organisation (ICESCO). This is one of the organisations of Islamic cooperation (OIC) institutes, based in Rabbat, Morocco.

According to Dr. Ssengendo, they financed the production of the automatic hands free dispenser and sanitizers with a grant of $ 20,000(Shs72m)

He explains how some of these innovations work and that most of them will be donated to some of their Institutions for using.

Elioda Tumwesigye the minister of Science, Technology and Innovations who was the guest of honor says that the pandemic has awakened many Ugandans especially scientists to be innovative.

Minister Elioda notes that no one is sure when the virus will leave this world, therefore, Ugandans have the role to play in fighting the virus. Adding that by coming up with such innovations, there will be hope for the safety of Ugandans.

“I want to thank you for these wonderful innovations that we have launched. We hope they will help and contribute in fighting the virus.” The Minister adds.

The country representative of ICESCO Dr. Mouhammad Mpezamihigo who is also the vice Chancellor Kampala International University applauded the innovators and pledged for more support from ICESCO.

The ceremony was also attended by Rosie Agoi, Secretary General Uganda National Commission for UNESCO/ICESCO who notes that its high time everyone starts thinking about how to fight the virus and keep their lives safe.

Agoi adds that if the government and other stakeholders can help innovators by funding them, there will be hope for a better future full of innovations.

Islamic University in Uganda joins other academic institutions like Makerere University through the Research and Innovation Fund (Mak-RIF), that innovated an automated hand washing kit for public shared spaces.