The building had been mortgaged by its owners with Equity Bank but after failing to pay, the exercise was conducted through public bidding on October 8 by Equity Bank Limited.

In a letter dated October 8, from Equity Bank Limited to all tenants of Simbamanyo House, the bank informed them of change of management after the public was purchased through public bidding. 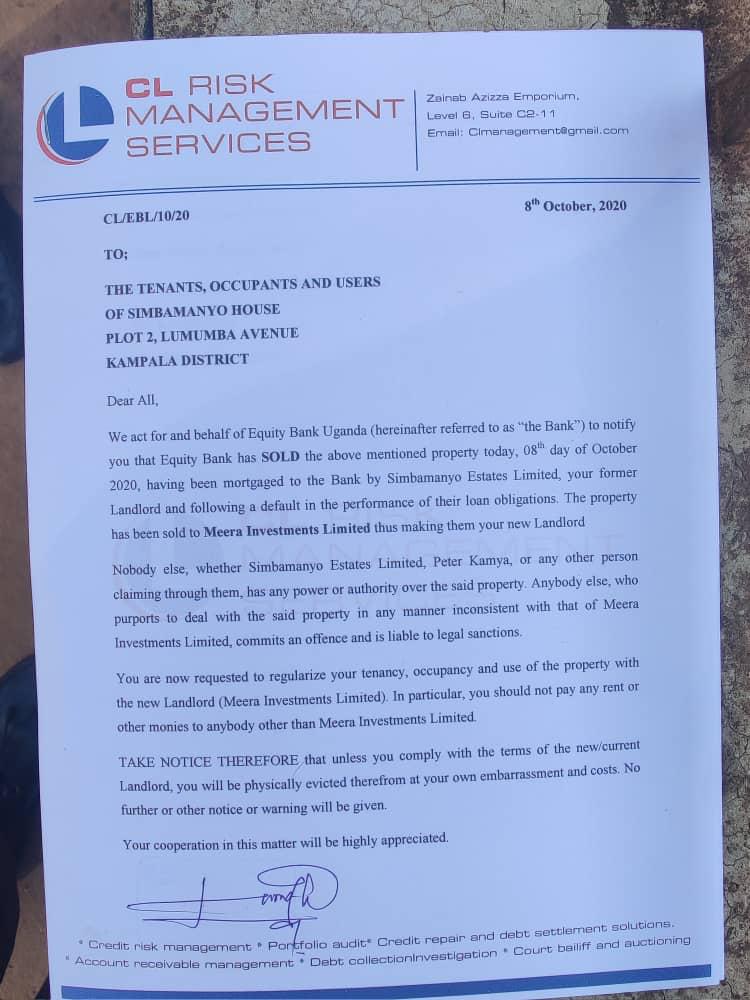 “We are writing to inform you that Equity Bank Uganda Limited, as mortgagee, has completed the sale of the above mentioned property, after a public auction concluded on october 8, 2020, to the evaluated bidder M/S Meera Investment Ltd. All the tenants were put on notice of the said auction via an advert in the Daily Monitor Newspaper dated September 8, 2020.” reads the notice. 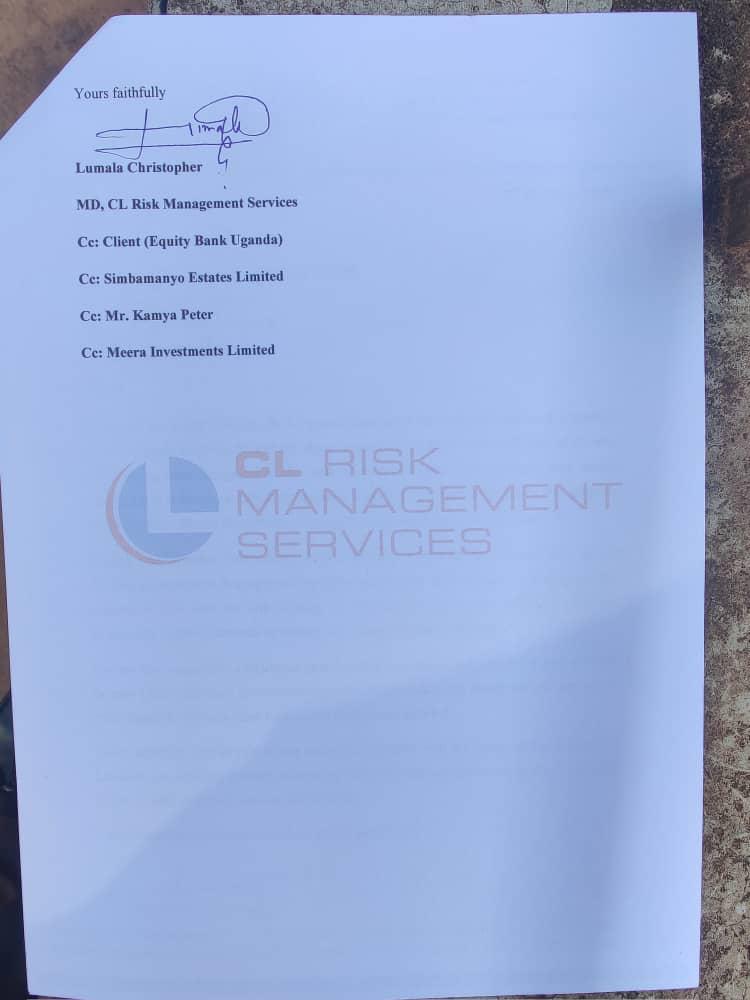 It further “The new owners will get in touch with all tenants individually to work out the modalities for the ownership transition. We trust you accord the new owners all the courtesy and all future rental payments and other tenant inquiries and obligations will be handled by Meera Investments Ltd or their agents.

Equity Bank, acting through Katende Ssempebwa & Co Advocate and AF Mpanga, Advocates, had earlier said it would after October 7 proceed to sell properties contained in plots on Lumumba Avenue and Mutungo-Luzira, both within Kampala if Simbamanyo Estates fails to pay Shs11.5 billion.

In a notice published on September 7 in the Daily Monitor, Equity Bank said Simbamanyo had until October 7 within which it must pay at least 30 per cent of the disputed Shs38.6 billion, failure of which it will proceed to sell properties against which the money was advanced. 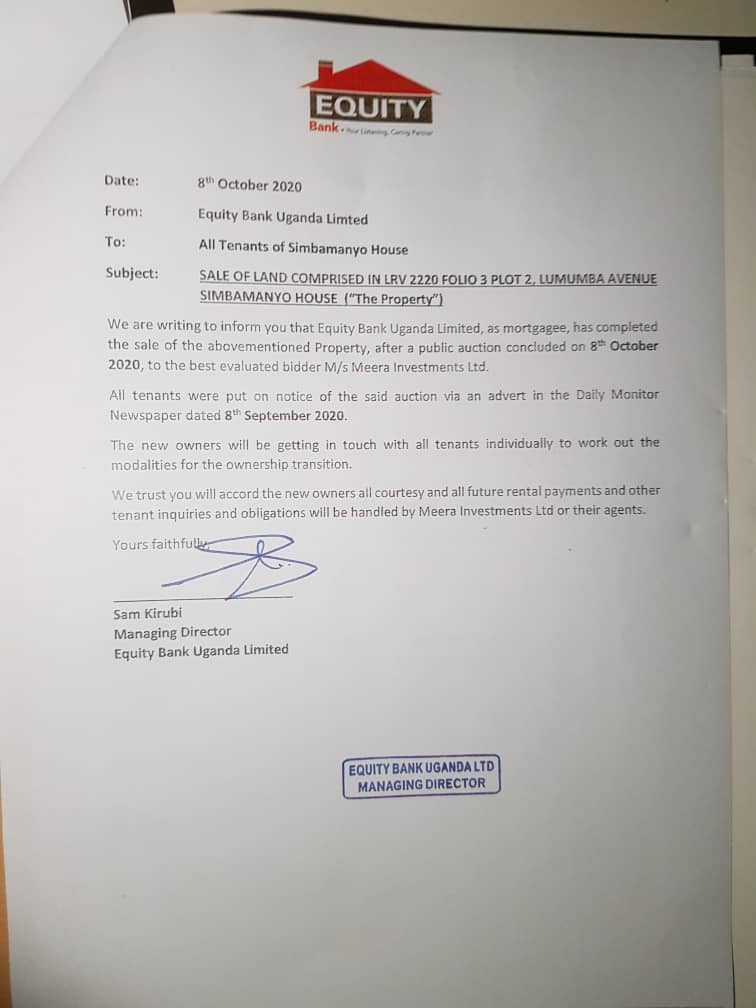 Simbamanyo had at the close of August put a caveat on the disputed properties, noting Equity Bank was trying to upstage the court process in which it is challenging the sum in dispute and the legality of loans drawn from Equity Bank Kenya.

Simbamanyo is embroiled in a property dispute with Equity Bank Uganda and Equity Bank Kenya resulting from unpaid loans that had been advance to the real estate company.

According to court documents filed in the Commercial Division of the High Court, on August 20, 2012, Equity Bank Kenya and Equity Bank Uganda entered into a loan agreement in which the two banks agreed to advanced Simbamanyo with $6m.

The loans, which would make up a consolidate sum of $8.10m (Shs29.83b) including interest and operational fees, among others, sought to finance the construction of Afrique Suites Hotel in Mutungo, Luzira north east of Kampala and facilitate the takeover of a prior facility advanced to Simbamanyo by Shelter Afrique.

The two banks, details indicate, pooled money together with at least $3.5m drawn from Equity Bank Kenya and $2.5m from Equity Bank Uganda.
However, Simbamanyo Estates is challenging the outstanding sum, saying it is only aware of $7.19m (Shs26.48b). 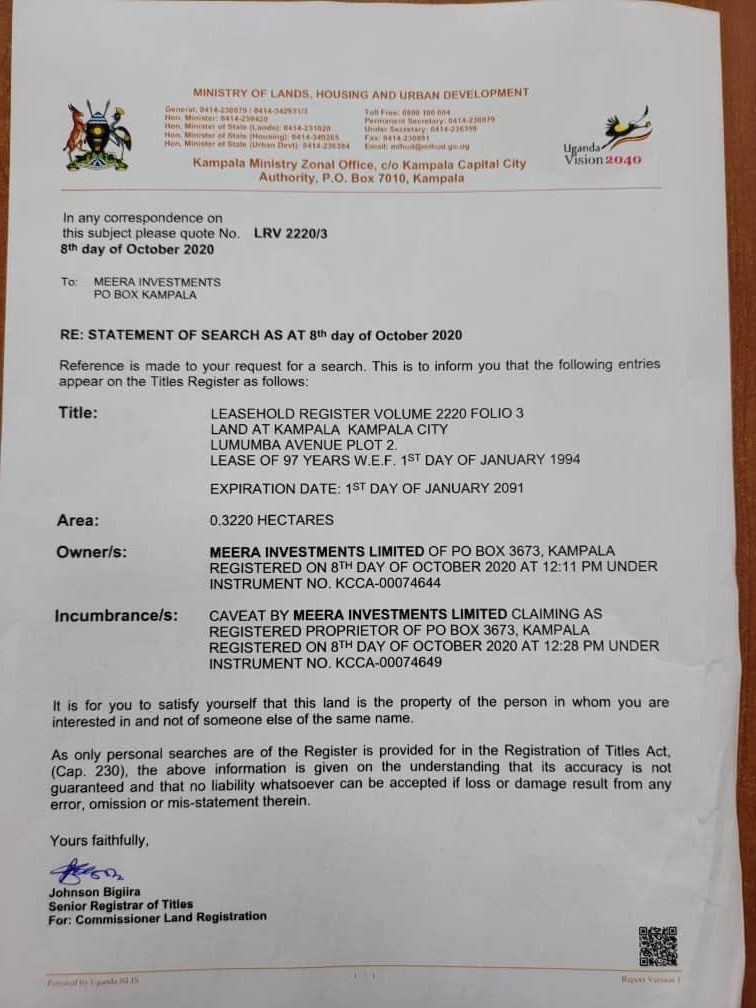 Simbamanyo Estates is also accusing Equity Bank Uganda of providing Equity Bank Kenya with an illegal cover to conduct business in Uganda where it has no jurisdiction.
The real estate company wonders how, according to court document, Equity Bank and Bank One, which provided bridge financing of ($10m) were drafted into the loan agreement yet Simbamanyo had never applied for any facility from the two banks later alone own a bank account in any of the said financial institutions.

However, in its defense, Equity indicates that Sambamanyo benefited and was aware of every financial transaction that was advanced to it.
Equity also argues that Bank One, based in Mauritius, was drafted into the transaction on the request of Simbamanyo, which had sought to obtain bridge financing of up to $10m.
Court documents indicate that Simbamanyo Estates had sought to offset the outstanding sum in a November 16, 2017 letter to Mr Samuel Kirubi of Equity Bank Group Kenya.