Kyambogo University has allowed the continuing students  to report to University for Physical lectures.

Last month (January), the University cancelled 1st February, the date that students were supposed to report for physical lectures after spending two weeks on online classes, following the President’s directives to wait for further guidance.

President Museveni had guided that all Higher Education Institutions were to continue studying online for at least another three months, to enable Government find a lasting solution for Covid-19.

According to the communication from Vice Chancellor Professor Elli Katunguka Rwakishaya to all staff and students, the University will open to continuing  students on 1st March for three weeks face to face lectures,(1st to 21st March),  followed by examinations which will begin on 22nd March to 11th April.

Professor Katunguka further clarifies that first year students will self-enroll online between 22nd March and 11th April, and then, students will officially report to the University on 10th April.

The University is also preparing for detail program for semester one and two of academic year 2020/2021 and proposals for graduation, will be communicated in the subsequent circulars. 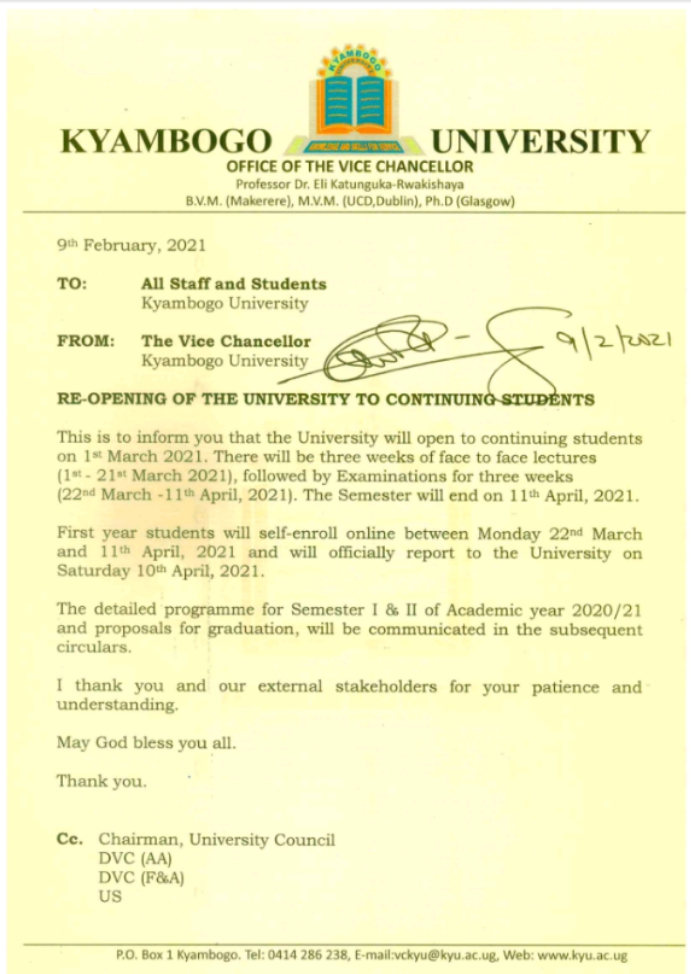 By the time, the University cancelled the first reopening date which was 1st February, most students had already reported in their respective hostels and Halls of residences, and some had started planning to go back due to the uncertainties surrounding the reopening of the University.

Prosper Ainembabazi, a second year Education student, said her parents have called her several times, demanding that she travels back home and waits for the way forward.

However, there are students who are arguing that 1st March is far for them to keep around, because the cost of living is also expensive. They contend that, they will travel back home and come back in March when they have the assurance that studies have resumed.