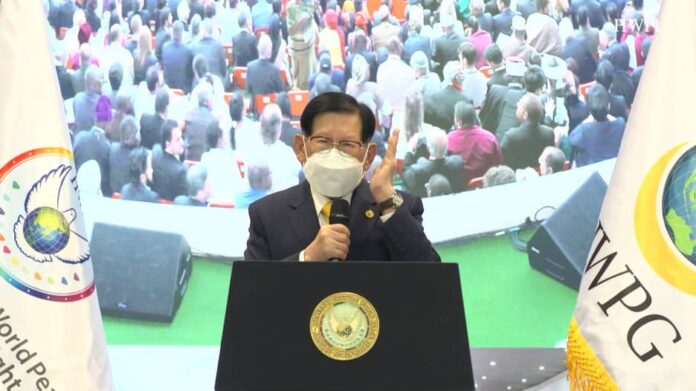 On March 14, HWPL’s 5th Annual Commemoration of the DPCW was held as a live webinar, joined by over 1,200 people in 132 countries from all sectors of the society including government, international organizations, heads of women and youth groups, religious leaders, press, and members of civic society. 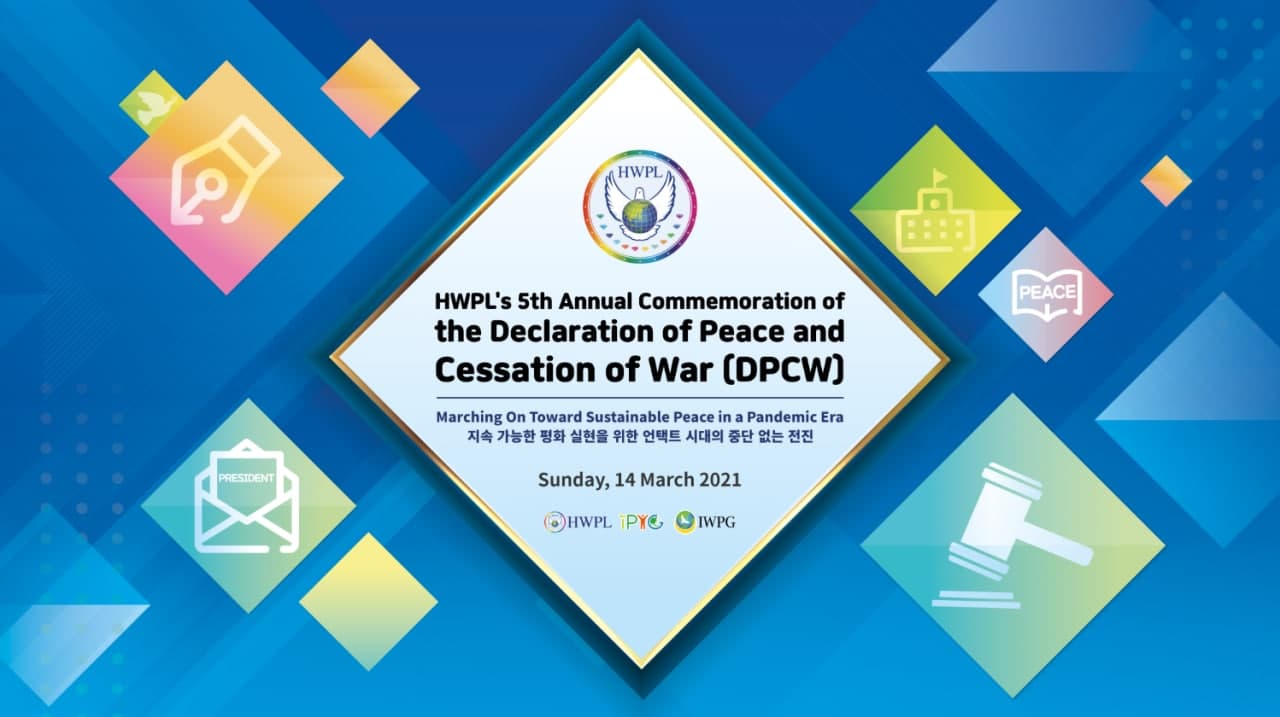 Heavenly Culture, World Peace, Restoration of Light (HWPL), organized this year’s commemorative event, “Marching on Toward Sustainable Peace in a Pandemic Era”, as a platform to share direction for the future and case studies of different sectors cooperating across the world as peace messengers, responding to the pandemic and bringing peace in this new socially distanced world.

The host organization, HWPL, is a peace NGO in Special Consultative Status with the UN ECOSOC and associated with UN DGC. For the purpose of ceasing all wars and creating a peaceful world as a legacy for future generations, HWPL has been carrying out 3 main peace initiatives – international law for peace, interfaith dialogue meeting, and peace education. 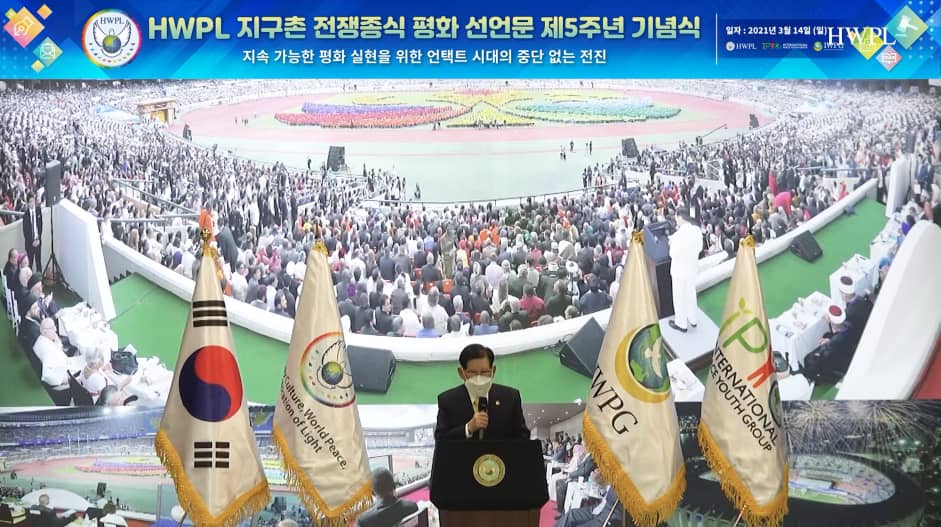 The Declaration of Peace and Cessation of War (DPCW) includes principles of peacebuilding such as the prohibition of the use of force, development of friendly relations, and peaceful dispute settlement. It emphasizes international cooperation based on interfaith dialogue and civic participation to create a culture of peace. Since its proclamation on March 14th, 2016, the DPCW-based peacebuilding model went on to receive government recognition and support for inter-religious dialogue, peace education, youth and women’s peace activities.

As a member of the International Law Peace Committee (ILPC) who drafted the DPCW, Professor Ciaran Burke explained the background of how the DPCW was founded on “the conviction that judicial and other dispute resolution measure can replace the role of war with the rule of law.”

He also stressed the kernel of the DPCW by borrowing words from Chairman Man Hee Lee of HWPL, is that “the envisioned effect of the DPCW is cumulative to scale up the moral and political responsibility of world leaders by crystallizing the legal obligations of their government thereby bridging the gap between law and politics.”

Efforts to institutionalize peace based on the DPCW are underway. Countries in Southeast Asia and Central America have begun to rebuild their national legal infrastructure based on the DPCW, and the local governments are officially declaring their support for the DPCW in order to implement peace principles. In South Asia, the DPCW was introduced into the university curriculum as an academic research course on the role of law for a peaceful society.

According to UNESCO, over 190 countries closed down educational facilities, and over 1.6 billion students lost their opportunity for sustainable education. As a part of the online campaign, “Teaching goes on”, HWPL’s peace education is now taught at 214 locations in 34 countries, providing online peace education for over 5,000 students 224 times in 15 countries.

Stressing the importance of strengthening partnership for sustainable education, Ambassador and Permanent Delegate of Mali to UNESCO, S.E Monsieur Oumar KEITA, said, “We must unite in a spirit of cooperation to ensure peace at the national and international levels. We must consider the need for a comprehensive legal approach that will lead citizens in their everyday lives, regardless of nationality, ethnicity, or religion. The preamble to DPCW with 10 articles and 38 clauses speaks of that very well.”

Regarding the importance of religion in spreading hope and peace during the pandemic crisis, Allama Syed Abdullah Tariq, President of the World Organisation of Religion & Knowledge, said, “Whenever humanity faces a difficult time era, there has been a religion which gives them hope and courage to overcome crises. Religion has its power to narrow down differences among us and unite us to be strong enough to break through obstacles. Such efforts will fertilize the culture of peace when the current generation is in desperate need for hope.”

Since it began in 2014, HWPL’s interfaith dialogue meeting also known as the WARP Office meeting is now expanded to 129 countries, seeing an increase in online meetings because of the pandemic. The religious communities in the WARP Office meeting also have held several pan-religious prayer meetings, meditation, and peace camps to reach out to people of the world who are facing hardship due to the pandemic.

International Peace Youth Group (IPYG), an affiliate of HWPL, is building a peace network of youth around the world with the Youth Empowerment Peace Workshop (YEPW), which was inspired by the DPCW’s peace realization process, to achieve youth empowerment proposed in the UN SDGs and Youth 2030.

Mr. Reuben Sapetulu, Deputy Secretary Agent for the United Nations Youth Association of Zambia (YUNA Zambia), said, “I participated in the delivery of 3,000 peace letters to the minister of justice in Zambia for the DPCW proposal. My commitments are simply because I agree that the DPCW is an effective way to bring a cessation of war and world peace. The YEPW was also inspired by the DPCW’s peace realization process. Spreading peace culture based on the DPCW is certainly the way to achieve peace. World leaders, please pay attention and support what the DPCW is stating about the peace realization process.” 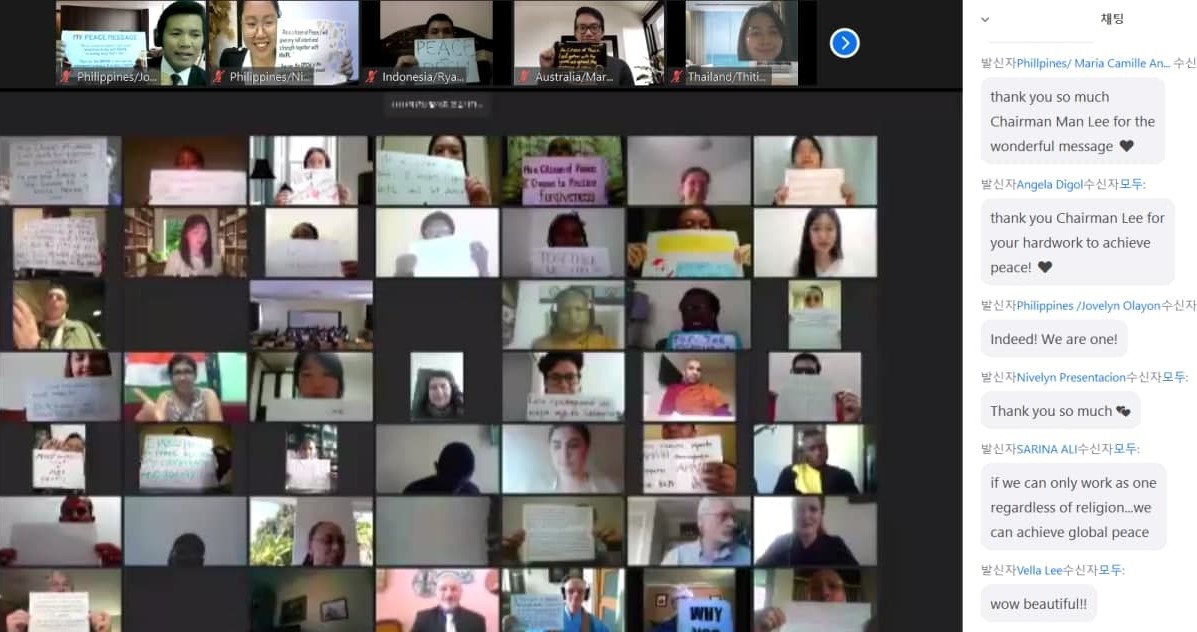 Chairman Man Hee Lee of HWPL urged cooperation and unity for achieving peace by saying “No property or anything can become a legacy in the future. We must create a world of freedom, peace, and love without war, and make it an eternal legacy for our descendants. This is what we need to do in this era. Although the process of submitting the DPCW to the UN was paused for a while due to the corona pandemic, as much as this desire to achieve peace, there is no change.”