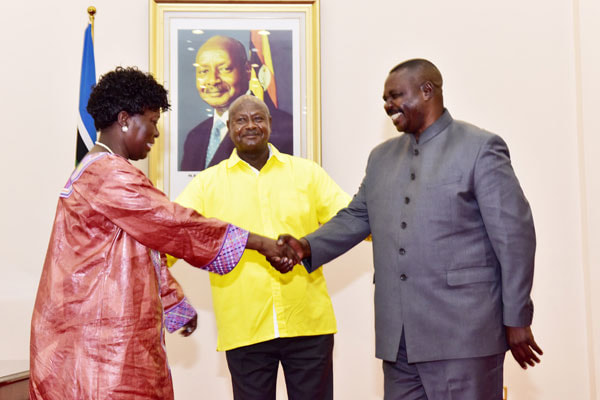 The President of Uganda who is also chairman of the ruling party, the National Resistance Movement  Yoweri Kaguta Museveni is today scheduled to meet the Speaker and her deputy.

Both Rebecca Kadaga and Jacob Oulanyah are contesting for the post of Speaker of Parliament. According to sources, the meeting is peddled at resolving the standing row between the two candidates.

Last year at a conflict resolution meeting at State House which was attended by both Kadaga, Oulanyah and other top party wigs that was presided over by Museveni, Oulanyah affirmed to the head of state that come rain or sunshine, he was going to challenge Kadaga and nobody would compel him to quit the race.

Currently, the two are in a cold war hurling insults at each other. Last week, Kadaga labeled her deputy a coward, noting that during the age limit debate Oulanyah called her and said there was something he couldn’t handle and she came in straight into fire as the Deputy ran away.

In retaliation the deputy speaker said his boss lost support and she should not be campaigning if she has support of the 300 MPs as she alleges.

Earlier this month, Kiboga district woman MP Ruth Nankabirwa was dragged into Kadaga-Oulanyah row on the floor of parliament after some members claimed that she was campaigning for the deputy speaker Jacob Oulanyah.

Nankabirwa denied the claims saying she was just reminding MPs of the 2016 CEC resolution to the effect that Kadaga was to serve only ten years and pass on the baton to Oulanyah.