What are the key things that stakeholders should note about the 2020/2021 General Elections?

These were the fourth (4th) General Elections to be held under a multi-party political system; The elections are remarkable as they were held amidst peculiar challenges posed by the #Covid-19 pandemic; Ugandans were determined to adapt to the challenges as a result of public health regulations and compiled and managed to fulfil the constitutional requirement to hold elections for the specified electoral positions every five years;

How do you view the entire process? 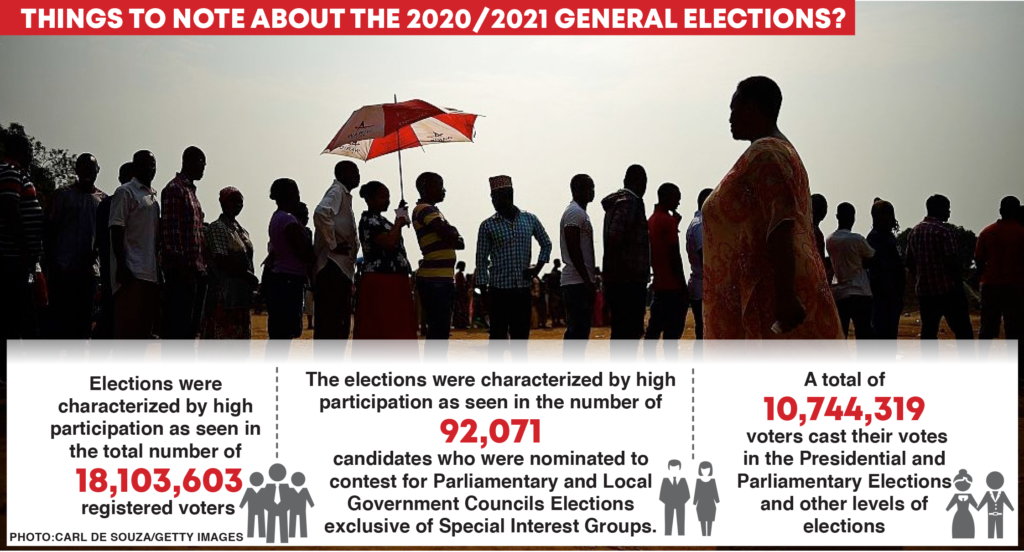 The elections were characterized by high participation as seen in the number of 92,071 candidates who were nominated to contest for Parliamentary and Local Government Councils Elections, exclusive of Special Interest Groups;

The elections were characterized by participation of political parties which presented candidates for nomination for the various elective positions in the General Elections (See the Table attached indicating the composition of Parliament by Political Party);

The people of Uganda are appreciated for participating in the elections in the recommended safe manner: they adapted to the modified guidelines for the elections, and largely observed the Standard Operating Procedures (SOPs) for prevention of spread of #Covid-19 during the electoral process; 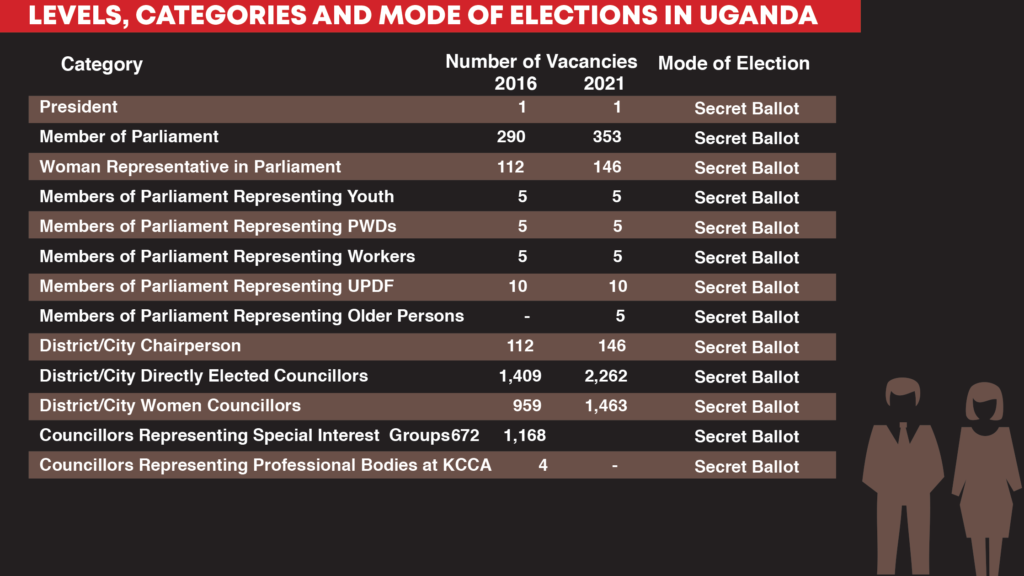 The various stakeholders played key role in achieving a successful electoral process (government, media, civil society, security, observers, etc.,);In conclusion, the electoral activities which were planned under the Roadmap have been concluded and leaders have been elected to fill positions at Presidential, Parliamentary and Local Government Councils level across the country.

How many elective positions were filled during the 2020-2021 General Elections programme?

We further had Special Interest Groups Councils and Executive Committees (from the Village to the National Level).

Are there any positions in this General Elections that have not yet been filled?

The Electoral Commission organised elections for all elective positions across the country; there could be some isolated cases where an elective position has not been filled, either due to no nominated candidate, or failure to conduct or conclude the election, or cancelation of the results of the elections.

What will happen to the positions that are not yet filled, if any?

Where a position has not been filled during the General Elections, the matter should be brought to the attention of the Returning Officer who will then make the relevant report to enable the Electoral Commission determine the next course of action.

How about the positions where the elected leaders have died?

Where an elected leader had died, the respective clerk (e.g. to the Local Government Council) will notify the Commission in writing and the Commission will organise and conduct elections to fill the vacant position at a later date …

How can I access the final results of the Presidential Elections?

The results of Presidential Elections can be accessed and downloaded from the Electoral Commission website: www.ec.or.ug

How can I access the results of Parliamentary and Local Government Councils Elections?

The Electoral Commission uploaded the results of both the Parliamentary and Local Government Councils Elections on the website: www.ec.or.ug and the results were also published in the Uganda Gazette. Copies of the Gazette can be purchased from Uganda Printing and Publishing Corporation (UPPC); 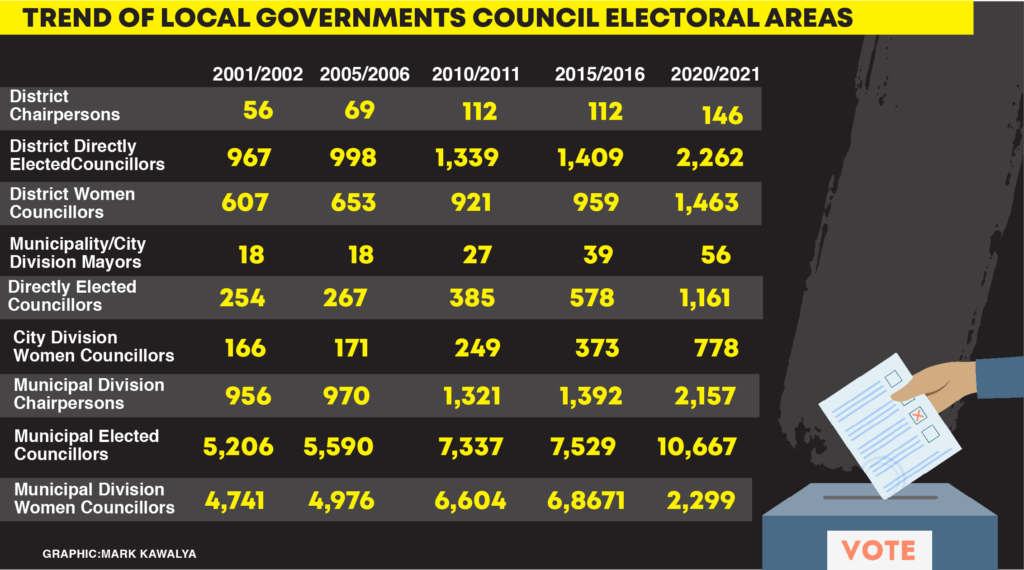 How can I challenge the results of an election?

An aggrieved person can challenge the results of an election by filing a petition in the Courts of law, in accordance with the procedures for the respective elective position.

The period for filing petitions is now over. But as a guide, petitions are filed as described below:

An aggrieved candidate may petition the Supreme Court for an order that the candidate declared elected as President was not validly elected, and such a petition shall be filed within 15 days after the declaration of the elections result (Section 59 of the Presidential Elections Act).

This is now overtaken by events.

Section 60 (3) of the Parliamentary Elections Act provides for aggrieved to file an election petition within 30 days after the day on which the result of the election is published by the Commission in the Gazette;

At least 100 petitions have already been filed and await hearing and determination by the Courts of law.

Section 138 (4) of the Local Government Act provides for aggrieved candidate or registered voter in the constituency to file an election petition within 14 days after the day on which the results of the election have been notified by the Electoral Commission in the Gazette.

At least 80 petitions have already been filed at this level and await hearing and determination by the Courts of law.  Can a person who has not been a candidate contest the results of an election?

An election complaint or petition can be filed by a candidate who loses an election (Section 59(1) of the Presidential Elections Act).

An election petition can also be filed by a concerned registered voter in the respective Constituency, in accordance with the procedures prescribed in Section 60(2)(a)(b) of the Parliamentary Elections Act and Section 138 (4) of the Local Government Act.

As indicated above, such aggrieved persons have already filed their respective positions.  When will the elections of LC I Councils be conducted?

Some temporary election officials have complained over non-payment of their allowances. Is the Commission aware of this matter? What is the Commission doing to address these concerns?

The Electoral Commission has paid the officials who rendered services on short term basis during various concluded electoral activities.

There are some categories of temporary election officials whose payment has not yet been made due to challenges with their accounts details or other issues related to their particulars. The Commission is taking all necessary measures to settle any claims, and we will ensure that all outstanding payments are made before the close of the Financial Year 2020/2021.

What activities does the Electoral Commission do when the General Elections are concluded? 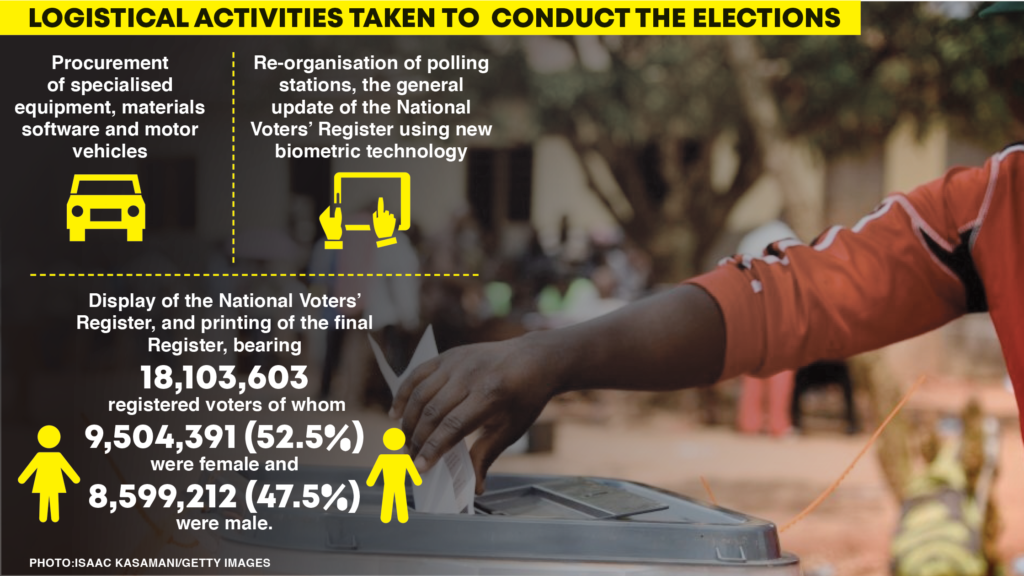 The Electoral Commission will perform various tasks under its mandate, which include the following:

Support the elected leaders to lead and serve in your community and at national level;