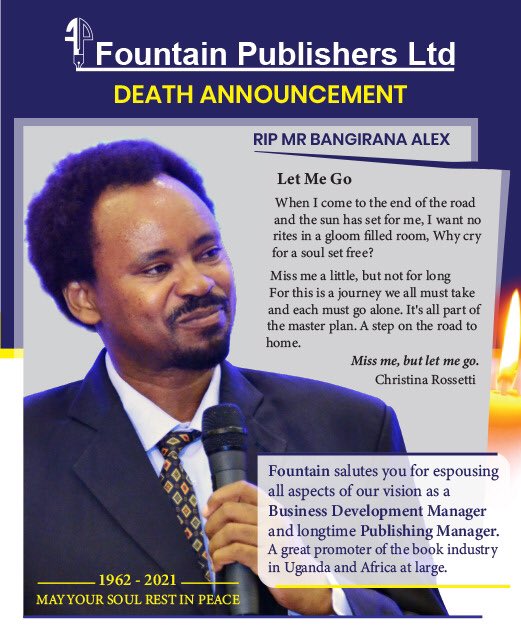 Fountain Publishers are mourning one of their longtime employee Alex Bangirana who passed away last evening.

Bangirana has also been mourned by many as a man who gave it for the growth of the book industry. He joined Fountain Publishers in 1995 where he used to manage publishing process or known as manuscript to market.

He  is reported to have developed a cold and cough last Friday but he has for long been battling diabetes. By the time of his death, Mr. Bangirana was a Business Development Manager. He will be laid to rest in his village in Rukungiri District this week.

According Mr Odoobo Bichachi, the Public Affairs Editor at Nation Media Uganda but also a long time Consulting Editor at Fountain Publishers who worked with Bangirana closely described the late as warm person whose work impacted the growth of book publishing in Uganda but also Africa.

“Alex was very warm personality, creative, friendly and brilliant and just two weeks ago, we were discussing a few book projects . But all in all as the world of book publishing industry, we have lost an icon who should be inheriting from the old generations” Mr Bichachi told Eagle Online