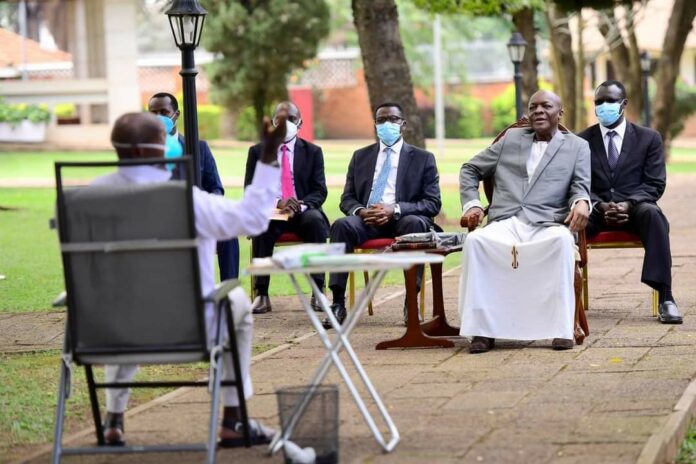 “Held a meeting with His Majesty the Kabaka of Buganda Ronald Muwenda Mutebi II at Nakasero State Lodge. His Majesty was in the company of Owek. Charles Peter Mayiga and Prince David Wasajja. We discussed matters of mutual interest,” President Museveni said today.

Tthe two held a private meeting and among the key issues suspected on their agenda was the Mailo land system that sparked controversy in the past few months.

In June, President Museveni castigated the Mailo land system that he termed as a bad land policy.

“It’s not anywhere else in Uganda. It is really very bad and not fair but some people support it. How do you allow these things to happen? Land owners should be entitled to full ownership of their land like elsewhere in Uganda. In Ankole, nobody can chase you away from your land. You even fear,” Museveni said during the heroes day celebrations in June. He said the system needs to be subjected to reforms.

On Saturday, the Kabaka in what seemed like a response to Museveni’s comments, said Buganda’s spirit of welcoming people from all walks of life is being interpreted as weakness.

“We condemn those who deliberately create a situation to derail us from reminding government on what belongs to us. We have heard many people discuss about land in Buganda and many have said it is curtailing Uganda’s development. This is not true. Those who say this want to weaken the kingdom of Buganda,” Kabaka said during his 28th coronation anniversary ceremony held at Nkoni Palace in Lwengo District.

“Such things bring sorrow to our hearts and make us question why land in other parts of the country is not mentioned ( as it is with Buganda). Buganda does not or has never wished to split from Uganda, neither has it and will never kick other citizens out(of Buganda).Why is the Buganda spirit of welcoming everyone being misinterpreted as a weakness?”

He insisted that Buganda will not stop demanding for what belongs to its people.