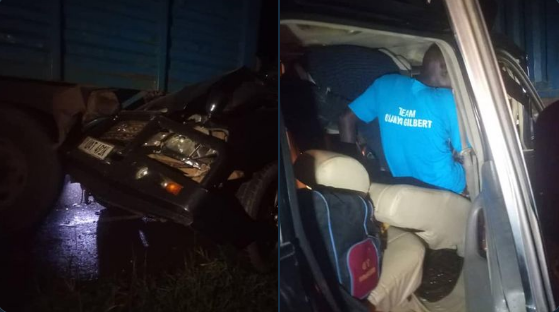 The Kilak South County Member of Parliament Gilbert Olanya was involved in an accident along the Kampala-Gulu highway. The accident occurred at Kyamukonda village in Nakasongola district at around 8:30pm.

Olanya was on the way to Kampala from Gulu at the time of the accident.

Savannah Regional Police Spokesperson Isah Ssemwogerere says that a vehicle registration number UAT 491K belonging to the MP rammed into a vehicle UBB 861B Fuso that was parked along the road.

Ssemwogerere said Olanya didn’t sustain any open injuries in the accident. He however said that Olanya’s driver sustained minor injuries and received first aid at a nearby health center before they proceeded to Kampala city in another car.

This is the fourth accident this month involving a Member of Parliament.

Two weeks ago, State Minister for the Vice Presidency Diana Mutasingwa Kagyenyi was involved in an accident along the Kampala-Gulu highway.

Mutasingwa, the Buikwe District Woman MP was involved in an accident at Bamusuuta village in Nakasongola district when the car she was travelling in overturned.

On Saturday, the Opposition Chief Whip John Baptist Nambeshe also survived being lynched by an angry mob after knocking a person

Nambeshe who was from Kampala heading to Mbale on Saturday knocked an unidentified person at Namwezi along Kampala-Jinja highway in Njeru municipality, Buikwe district.