Some things require many words and reams of paper to explain, others require just strict observance that is why I believe the Greater Masaka rocks, bricks, clubs and machete wielding gangs are a subversive (rebel) outfit. For Uganda or any nation to survive, there must always be strict ability to gather, evaluate, interpret and understand her(country’s) general security and defence environment.

In his warning to the perpetrators, the Commander In Chief early this week that the latter have no chance to disorganise Uganda or defeat NRM however, there is a total International paradigm shift from the traditional 3Cs (Command, Control and Coordination) which worked well for NRA/UPDF because of gun power and numerical strength to now popular 3Ds (Detect, Delay and Deter) which should have been but failed in Masaka. In my view and looking at the pattern of events, the Masaka gangs seem to be employing primitive weapons but have superior skills, advanced and well organised, A situation which requires more intelligence gathering than numbers and gun power, this must be timely and above all truthful. 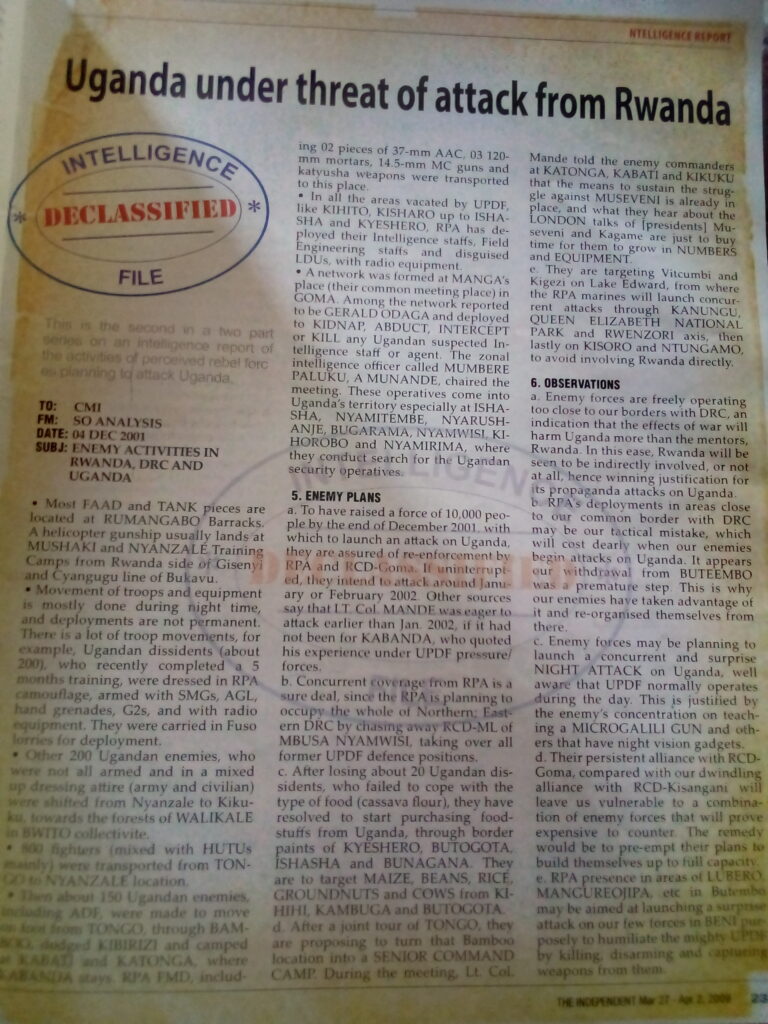 Availability of intelligence is of paramount importance because intelligence is to be alert on enemy action, destroys enemy communication signals, helps in issuing and receiving warning orders, appreciate, prepare and stage ambushes, formation of strike groups. According to Prof. Charles Maier (in Harvard history) in 1990, National Security is defined through the lens of National Power meaning – National Security is best described as capacity to control those domestic (read Masaka) and foreign conditions that the public opinion of a given community believes necessary or crucial to enjoy its own self determination or autonomy, prosperity and well being.

What is happening in Masaka in the past month recording more than 35 deaths can be compared to Mungiki gang that clandestinely and criminally inflicted untold terror to the population in Kenya’s Central Province and Nairobi Slums almost bringing down the State of Kenya a few years ago.

First, the country (Uganda) has been under curfew (no human movement at night) for the past 18 months. Secondly, Elderly and Poor victims are the ones targeted and this could be because most of them rarely own smartphones that can record evidence of the heinous events. The perpetrators appear to be highly inducted, trained and could have contacts with-in the State given their concealment, from all the three main elements of Nationhood i.e Country, Nation and State which is referred to as the theory of the Three legs of the stool. The foregoing situation means that the security officers concerned have either failed to do what we call Threat Assessment or Hazard drill which must have been the task as soon as the Kiddawalime/ Nakyambadde episode had taken place defeating all the crucial elements of National Security and our security interests which interests include;