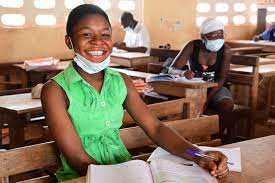 Medical Research Council (MRC) in Uganda launched an initiative to minimize the number of school dropouts among the female gender in Kalungu and Wakiso districts.

The campaign was launched by MRC delegates at the Royal Embassy in Lukaya town council, Kalungu district, where they organised a seminar, which was attended by heads of education and different school head teachers in Kalungu district.

Dubbed as ‘Simameni’, the program is expected to benefit about 1500 girls from Kalungu and Wakiso districts. These girls will be given items to use while at school and they include; reusable sanitary pads, washing soaps, books, towels and many others.

MRC will provide basic necessities and other scholastic materials to a girl child such that untimely and abrupt ending of studies among this gender is defused.

Heads of education in Kalungu district welcomed this development and disclosed that many girls drop out of school due to the lack of basic necessities.

Speaking to the congregation, Mr. Mulindwa Quraisi, the head master of King David High School, Kalungu district, pointed out that such an arrangement will reduce discrimination of girls during their menstruation periods, and also enable them to stay in school.

“This arrangement is going to help a girl child in a two way fold. One; when a girl is in her menstruation period, she is stigmatized, and then doesn’t study very well. Two; their brains are psychologically affected; they feel timid which is called Stigma. So this will help a girl child not to feel inferior when she is in company of others and also knowing that experiencing periods is normal, and also knowing that proper hygiene is paramount as a girl child,” said Mr. Quraisi.

Another headteacher, who failed to identify his name, said “In most cases, girls have failed to study and later on drop out of school due to difficult situations they encounter…”

“When a girl is in school and experiences menstrual periods, they should know that it’s normal and natural. Most importantly, I am asking them to help a girl child to obtain necessities to use when she is in periods, to maintain her hygiene,” he said.

He warned school going girls to stay away from boys who deceive them with petty items and ruin their future. “I am calling upon all men and to spare a girl child, such that she grows, completes her studies up to the time when she is old enough to get married and all will go well,” Caleb said.

Cases of school dropouts among the female gender have escalated most especially after the influx of Covid-19 pandemic in Uganda, in March 2019. For instance; Ms. Joan Aja, a gender and resource mobilisation officer of Uganda National Teacher Union (UNATU), wrote an article on December 4th, 2020, which indicated a sharp increase in girl child school drop outs.

In her article, she put it clearly that the influx in Covid-19 in Uganda and subsequent closure of schools exposed many girls to risks of child marriage, sexual abuse and early pregnancy leading.