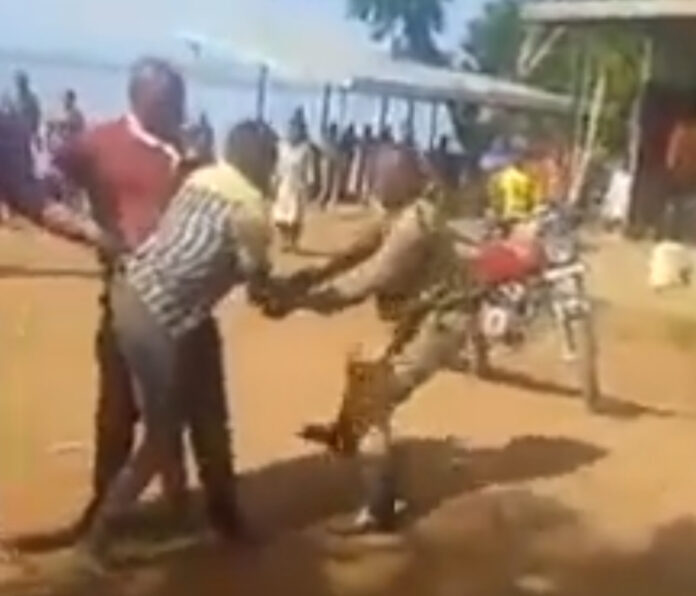 Police in Mayuge shot and killed a suspected boat engine thief. The incident arose from a case of aggravated robbery, of a boat engine that belonged to Agodo Zakaria Osako which occurred on the 17th July 2021, at Nduwa Landing Site, in Mayuge district.

The engine was robbed from two office workers by three men, armed with pangas. As a result, a search was conducted till the 6th November 2021 when marine officers recovered the engine from a one Baligeya in Dolwe Island in Namayingo district. The suspect revealed that Kapere Maka Umar was the one who sold it to him.

The OC police post in Musubi Landing Site was alerted, and on the 7th November 2021 at around 9:25am, two police officers attached to Musubi Police Post, at Musubi Landing Site, Muyanzi village, Bukaboli Sub-county in Mayuge district, went out to trace for the suspect.  The two officers included; CPL Wandyete Patrick, the OC post and PC Kataba Abubakar.

They arrested the suspect identified as Kapere Maka Umar, a 32-year-old fisherman connected to the theft of the boat engine.  In the process of cuffing him, they faced resistance, after the suspect turned violent and pounced on the police gun.  A physical altercation ensued and the officer was wrestled to the ground. His brother called Kapere Bampalana, also attacked PC Kataba and tried to disarm him as well.

Police spokesperson Fred Enanga said during the scuffle, CPL Wandyete fired several bullets, injuring the leg of the suspect. In the process he also injured both his legs, the hand and of the complainant Osako, and the brother to the main suspect too.

Unfortunately, the suspect Kapere Maka Umar, succumbed to the injuries at the scene. The other victims were rushed to Kigandalo Health Centre IV. However, Kapere was transferred to Jinja Main Hospital in critical condition, while the OC Post was rushed to Buluba Hospital for further treatment.