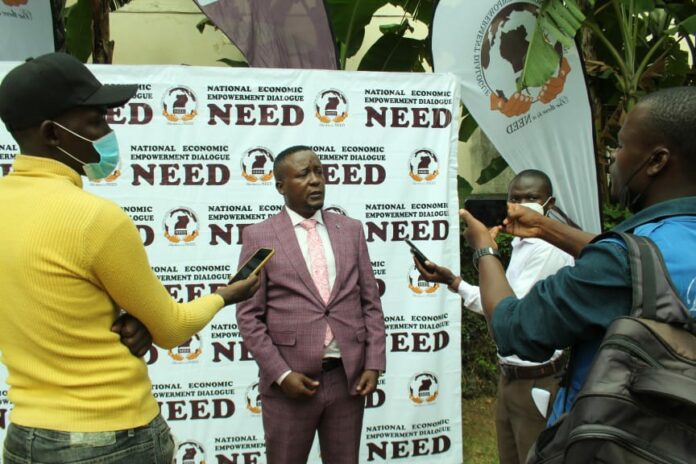 The National Economic Empowerment Dialogue (NEED) leader Joseph Kizza Kabuleta has cautioned Ugandans to desist from being distracted by some government programs that are making them poorer.

He says government has a tendency of coming up with unsustainable poverty elleviation programs such as emyooga, bona bagagawale and parish model with an aim of confusing and sidetracking ordinary Ugandans from fighting for their vast natural resources which are being enjoyed by a few greedy people in power.

To say this, Kabuleta, a former presidential candidate was addressing NEED delegates and the locals of Bugisu subregion on Friday during his nationwide sensitization campaign premised on protecting Uganda’s national deposits that could be used by citizens to elleviate themselves from poverty.

He urged them to wake up and fight for their wealth which is being systematically stolen by a few political elites in the country.

“Its high you stopped being diverted by government through some of its useless programs that make you poorer. Uganda is a rich country endowed with vast natural resources and you have all the rights to that wealth. You should fight and benefit from them so that poverty becomes history,” Kabuleta said.

He also criticized government for ‘killing’ the coffee market yet most the people in Bugisu depend on coffee farming for survival.

“Bugisu region has the best Arabica coffee and its being grown, its being marketed but the people who are growing it are very poor and they are not getting its money-worth. So the purpose of NEED is to bring people into the realisation of what wealth they should expect from the things that are theirs naturally. Bugisu is a very rich region, its rich in minerals like uranium, mercury and gold. The region is also rich in agricultural produce like coffee; it has one of the best coffee in the world. It also has other things like tourism potential with Mountain Elgon and so many other things,”the politician asserted.

” So our purpose is to see why there’s such a dichotomy between the wealth that people have and their livelihood. How could they be so poor amidst so much wealth. The people who have been stealing the wealth of Bugisu and keeping them poor are the people giving them useless subjects to talk about especially those that divert them rather than concentrating on talking about the wealth that they have and why they shouldn’t be partakers of that wealth. If minerals are coming from here why shouldn’t the people of Bugisu be partakers of that wealth and why are they poor yet they are rich?” Kabuleta further wondered.

On the other hand, Bugisu people lead by their cultural leader Umukuka of Bamasaba Jude Mike Mudoma called upon government to get them a ministry of Bugisu like that of Karamoja for easy service delivery.

Unveiling the political movement, the former journalist said NEED is constituted of politicians who currently hold no office but have influence in their respective sub-regions and are able to start meaningful discussions that shall see Ugandans fight for their resources.