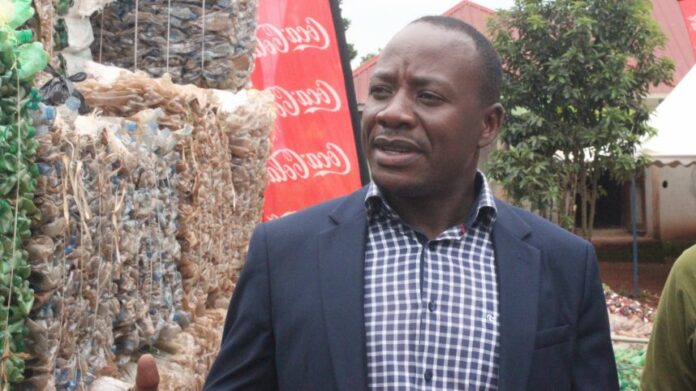 With an estimated 600 tons of plastic volume consumed every day and about 51% of this left uncollected; a critical environmental red flag is raised for Uganda.

The increasing volume of plastic waste all around Uganda’s major cities/ municipalities/towns/trading centers is directly suffocating the environment and ultimately as Ugandans, the Country is experiencing the backfire effects of human actions on indiscriminate waste disposal.

This is consistently manifested by the clogged and contaminated water sources, flooded drainage channels, plastic waste polluted land for agriculture, among others.

The Executive Director Centre for Peace and Conflict Mitigation (CEPCOM-UGANDA), Kuteesa Stephen, says that waiting until government policies on prohibition of plastic production are implemented in order to save humanity and the environment from the glaring side effects of plastic waste pollution is not the solution but each one taking the responsibility in own space to adopt responsible disposal of plastic waste.

The initiative is aimed at motivating and empowering individaul community members to actively engage in PET plastic waste collection for sale as a source of livelihood and in return ensure increased volumes of PET plastic waste removed from the environment and recycled for sustainabilty as a route to a plastic free environment.

The initiative is rolled out based on tailor-made sensitization training engagements on mindset change for selected community clusters composed of 20 individual members (women, men and youth) under the theme: PET plastic waste collection for improved livelihoods and plastic free environments.

Mr. Kuteesa emphasize that if the general concept of waste is demystified through mindset change, communities will realize that waste collection is a virgin source of income that hasn’t been well explored to tap into its returns. It is the alternative ‘gold mine’ with the potential to create employment for community members yet at the same time, a pathway to ensuring sustainable plastic waste free environment.

The Centre for Peace and Conflict Mitigation (CEPCOM -Uganda) use a community participatory approach to promote protection, conservation and regeneration of the environment in partnership with Zenzero Association, Coca-Cola, Deutsche Gesellschaft für Internationale Zusammenarbeit (GIZ) among other partners.