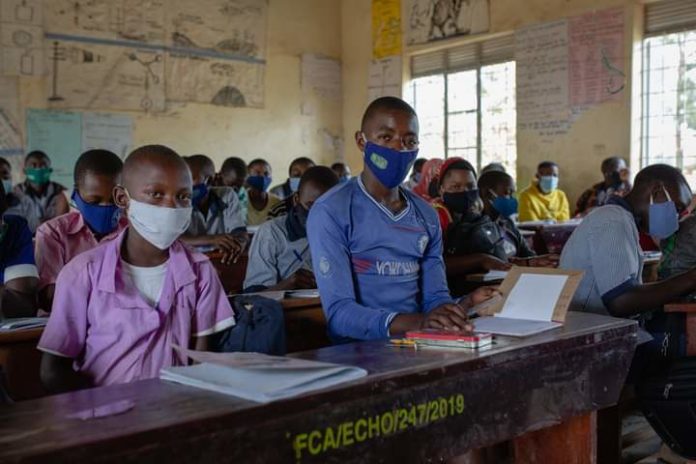 After two years of closures, longer than anywhere else in the world, Ugandan schools reopened this week and refugees eagerly returned to classrooms across the country. Home to 1.5 million refugees, Uganda has the largest refugee population in Africa, and over half of them are aged under eighteen according to the United Nations. Classrooms that were crowded before the pandemic are now struggling to accommodate more students who have entered the system while schools were closed.

”While out of school, many students worked to support their families, so they have not progressed. At the same time, others have started school, this means that classrooms that were at capacity before the pandemic will now be crowded,” says Wycliffe Nsheka, Country Director of Finn Church Aid (FCA) in Uganda.

”We have built new schools to accommodate the increased number of students, but I don’t think it will be enough to relieve the pressure on teachers. Before the pandemic, we had 160,000 refugees enrolled in the schools we managed in partnership with UNHCR. Our teachers sometimes had classrooms with up to one hundred students and many fear that the class sizes will be unmanagable once the term gets underway,” says Nsheka.

”Teaching refugees is never easy. They struggle with trauma and poverty inside and outside the classroom. We fear that now that schools are open, even more students will come – we all have a lot of catching up to do,” says Vallence Tukacungurwa the Head Teacher at Bukere Secondary School which was built by FCA with funding from the U.S. Department of State during the pandemic and opened for the first time on 10 January.

While schools were closed, FCA provided home learning packages, textbooks, exercise books and pens to students so that they could continue their studies at home and lessons were conducted via radio so that they could still participate. Yet, as economic opportunities declined due to the pandemic, many students were forced to work to support their families, particularly in refugee settlements.

Isaac Munyuza (18) lives in the Kyaka refugee settlement and, although he dreams of becoming a doctor, for the last year he has worked digging holes for a dollar a day. Munyuza has enrolled at Bukere High School and, when he visited to enrol, he said, “I am excited to go back to school. I like my new school.”

Nsheka hopes that FCA can help students like Munyuza fulfill their dreams but is concerned about the pressure on teachers in the classroom. ”It’s one thing to build new classrooms, but we also need more teachers so that we can reduce class sizes. After missing out on school for so long, we need to do everything we can to help these students catch up on their studies so that they don’t miss out on other opportunities,” says Nsheka.