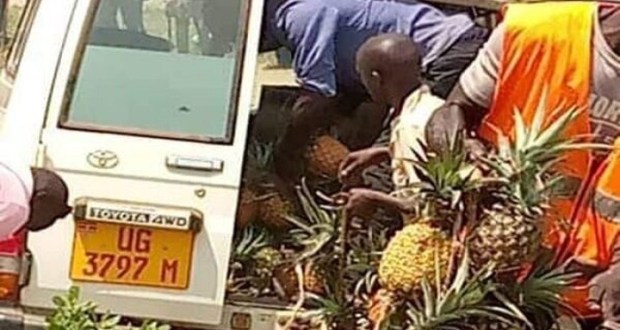 The MOH Senior Public Relations officer Emmanuel Ainebyona has revealed that disciplinary action will be taken against an ambulance driver.

The MOH released a statement on Thursday evening saying a photograph making rounds on social media drew their attention. This photograph shows a man loading pineapples into the cabin of an Ambulance.

Ainebyona said the Ministry has taken a keen interest in the matter and immediately carried out investigations. He also revealed that this ambulance is under the management of Rukungiri District local government.

“We shall use a medical command and control system where no ambulance takes a journey without without authorization by the Regional Emergency Medical Services Coordinator,” Ainebyoona said.

Apparently, the vehicle had taken a patient to Ntungamo and on return, the driver loaded the pineapples as seen in the picture.

Ainebyona said that such behavior is the reason why the government has taken on the centralization of the Ambulance management into a National Ambulance service.

The Ministry of Health has consequently asked the district to take action on the driver whose identity remained a mystery to the public.

According to Ainebyona, they are taking all measures to bring the culprits to book. Furthermore, they also want to ensure that they stop this abuse once and for all.

Ainebyona also thanked the vigilant public that captured this abuse of the ambulance in question and circulated it. This also enabled the ministry to take disciplinary action.