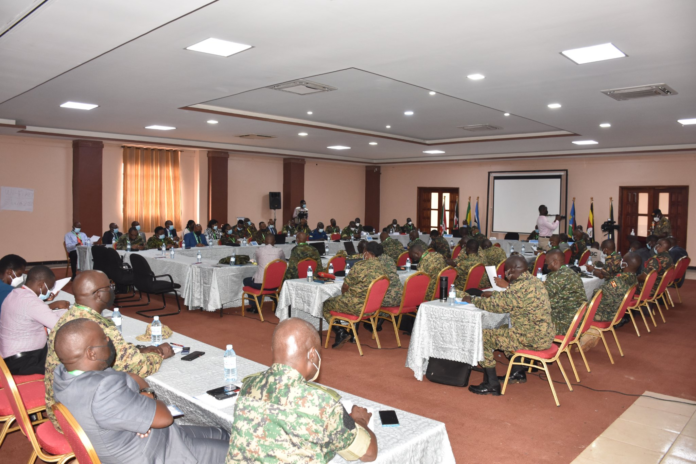 The objectives of the Main Planning Conference are to update general instructions and ideas by the host Nation, review Administration and Logistics plan, Review the Civil-Military Cooperation projects to be carried out during the exercise, survey exercise locations and draw the Exercise timelines among many others.

While opening the conference, the UPDF Chief of Personnel and Administration, Maj Gen George Igumba, representing the UPDF Joint Chief of Staff, reiterated Uganda’s commitment towards the successful hosting of the exercise.

“On behalf of Uganda Peoples’ Defence Forces and the Republic of Uganda as a host Nation, I do assure you of maximum support to this cause to ensure the success of the exercise in Jinja later this year,” said Maj Gen Igumba.

“The exercise will go a long way in enabling us to build synergies that will govern and strengthen the strategic vision of our leaders for the good of the people of East Africa,” Maj Gen Igumba added.

Colonel Raphael Kiptoo who represented the EAC Secretary General said the general objective of EAC exercises is to enhance the state of readiness and interoperability of EAC partner State Armed Forces, Police, Civilian components and other stakeholders in responding to complex security challenges.

“Such exercises enhance the already high level of interconnectedness and interoperability of our Armed Forces which has been achieved in operations. The East African Community will continue counting on your support in the EAC integration process,” said Col Kiptoo.

The Chairperson of the conference Brig Gen Jerry Korir called upon members to put maximum effort, energy, commitment and perseverance so that by the end of the conference, they are able to produce the required documents for the Final Planning Conference.

The exercises have been conducted since 2005 under the themes of Peace Support Operations, Counter Terrorism, Counter Piracy and Disaster Management. Each of the member states presented their Special Ideas on each of these thematic areas.

The three-day Conference is also being attended by Defence Liaison Officers of the EAC States, Defence Attachés accredited to Uganda, General and Senior Officers, representatives from the Police, Prisons, Immigration and Civilian components.

The Final Planning Conference will be held between 22nd and 25th March 2022 in Jinja before the actual Field Training Exercise from 27th May to 16th June 2022 in the districts of Jinja, Mayuge and Buikwe. The exercise will attract over 1,500 participants from the Military, Police, and civilian components from all the six EAC partner states.