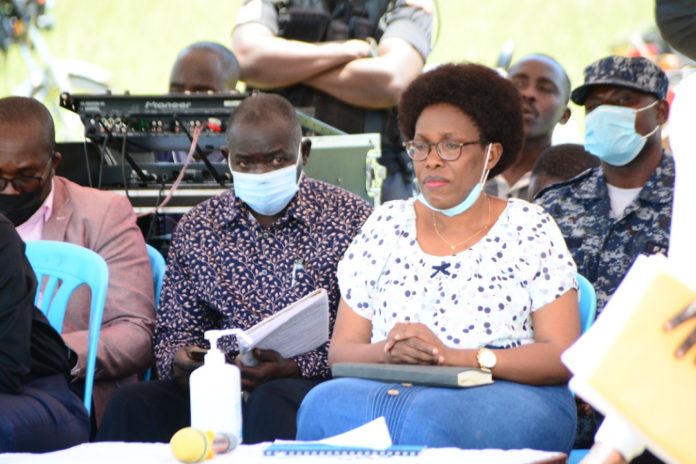 Lands Minister Judith Nabakooba has underscored the need for government to utilise the Land Fund as a way of putting an end to the various land wrangles.

Nabakooba who was meeting locals at Bugashe and Katojo wards in Mbarara South Division said the land fund is available to sort landlords that are willing to negotiate with the government much as the funds are limited.

“Government can buy land for its people using the Land Fund under the Uganda Land Commission, we have been using it in some areas and it has helped a number of people,” the minister said.

According to the minister, the money can be gotten much as the landlords who usually want to be paid are many yet the money is not enough but it can be got if the government.

At the two wards, landlords told the minister that they have for long co-existed with the bibanja holders for a long time and they don’t see a reason to chase them away from the land. They however tasked her to work with the government and buy the land for the tenants.

“What we are going to do is to open the boundaries for the three landlords and establish the status of these tenants (bona fide and lawful). Once we know the right acreage which is being covered by them, then the chief government valuer will give us a value that will enable government estimate the cost of the land,” Nabakooba said.

She shared that they are going to be in engagements with the landlords, district leadership, MPSs and the community to come up with complete practical recommendations that will help solve the matter to enable the tenants to also get titles in this area.

“I have liked the landlords here, they are willing to negotiate. They have said they live here with the tenants and they don’t see reason to be fighting with them over land. They want the government to come and value the land, pay it so that they can also remain with part of the land to conduct business and the tenants to get their titles too.”

She pledged to take this forward and begin negotiations with these landlords to see that this land is bought.

“When we are done with the processes and everything I will take a report to H.E the president and tell him that his people want him to buy them land.”

Way back in 2019, the government through the program of Systematic Land Adjudication and Certification (SLAC) under Mbarara District had started a project of processing titles of tenants in Bugashe and Katojo wards.

Unfortunately a caveat was instituted by Mr Peter Babigamba and Mr Katatumba William.

Residents that were led by Mr Edmond Ntimba requested the minister to give them a general survey of the lands in Katojo and Bugashe wards under the titles captioned since they do not know how much land and exact the exact person that claims their land.

Ntimba also told the minister that they are under constant threats and insecurity of being forcefully evicted from our bibanja.

“A substantive number of our residents panicked and cheaply sold off their land to Bibagamba and are now landless,” he said.