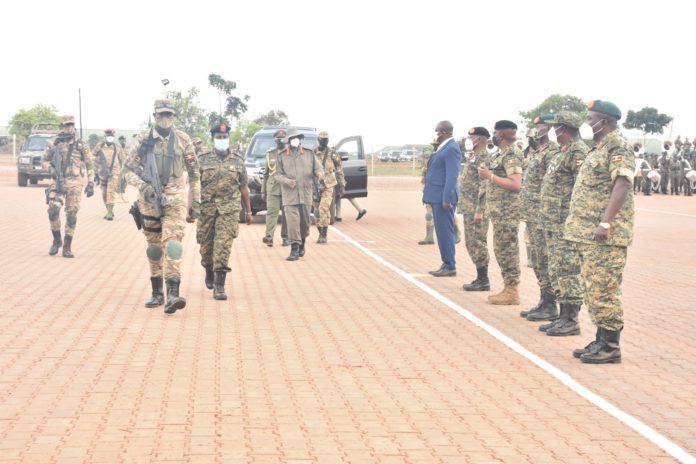 President Yoweri Museveni and Commander In Chief of the Uganda Peoples’ Defence Forces (UPDF) over the weekend passed out 6237 Local Defence Personnel at Kaweweta Recruit Training School, in Nakaseke District. This is the fourth Intake of LDPs to be passed out.

This group is the first of its kind. Originally LDUs as they were commonly known were under the command of Uganda Police when they were passed out. They are now directly under the UPDF and have been deployed to different units and divisions of the UPDF, not villages as the case was with the earlier groups.

In his remarks at the function President Museveni said that Local Defence Personnel are trained to remain in the reserve forces as they retain their original jobs.

The President, however, noted that to have specialized manpower, most especially in the infantry division, many if not all LDPs, that were passed out will soon be recruited in the army.

“It seems you will be LDPs for a short time because we want to recruit you in the army,” the President said.

He cautioned the newly passed out LDPs to maintain discipline and guard against risky behavior especially alcoholism and womanizing in order to preserve their health. “Once you keep your health, follow regulations of the army, train, and the future will be very bright,” he observed.

He mentioned that graduands acquired skills in the use of modern weapons as per the requirements of a modern army. He encouraged all commanders of units and formations to continue building the capacities of all soldiers so that they build a professional force.

The President continued that apart from the European wars; the country is stable at the moment with only a few negative elements to deal with like cattle rustler s in Karamoja sub-region and the Allied Democratic Forces in the DR Congo, the latter currently being neutralized under the combination of both UPDF and FARDC forces.

He applauded the UPDF leadership for continuing to develop the army training institutions like Kaweweta, Singo, Kabamba and others into specialized formations to create capacity among forces.

On land encroachment, the President cautioned all illegal occupants to stay away from army land.

“I am the one who told the army to come here because I was here fighting. I know the land myself. This land belonged to the Union,” he emphasized.

He thanked the people of Ngoma, Nakasongola, Luwero and Nakaseke for supporting the army. “When we were fighting, you supported us,” he concluded.

The Minister of Defence and Veteran Affairs Hon. Vicent Bamulangaki Sssempijja expressed sincere gratitude to the President for his unwavering support to the accomplishment of defence activities.

He noted that the water project and a first-class road network at the training school are a result of the defence ministry’s strong alliance with other Ministries Departments and Agencies.

He noted that the pass out was a result of the President’s strategy to build capacity within all UPDF units and formations so that the Forces can effectively deal with internal and external threats. He thanked the trainees for the commitment, and their families for allowing their children to undertake the training.

Hon Ssempijja also noted that UPDF is trying to increase the capacity of the engineers’ brigade so that it can be able to undertake bigger projects and for National Enterprise Corporation to engage more in commercial projects and the production brigade to increase production.

He reminded the President that he would soon present to Parliament a UPDF Amendment Bill and a paper in Uganda Air Cargo as earlier guided by him, and wished the graduands success at their fresh postings.

Speaking at the function, the Chief of Defence Forces Gen Wilson Mbadi thanked the CIC for his guidance in scaling up military capacity that can deal with arising national security issues.

“You must work hard to make Uganda a secure country and contribute to regional peace against terrorism, cybercrime, and pandemics that transcend national boarders,” Gen Mbadi told the fresh LDPs.

He noted that such security challenges require combat readiness to address them.

He was happy to learn that the Recruits Training School, Kaweweta had built the capacity to train over 6000 trainees in one go and asked them to continue developing the human resource to ensure that the vision of the school is achieved.

He encouraged LDPs to serve the country with pride and commitment observing its core values.

He implored the new units absorbing the new recruits to continue training them so that they become more mission relevant. “You rust, you rot,” he warned.

The Commandant of Recruits Training School, Kaweweta Brig Gen James Ruheesi, in his speech, acknowledged the shared joy for managing to train 6237 Local Defence Personnel, most especially the 947 females.

He said the training aimed at equipping trainees with skills in selective combat, discipline, and robust military skills so that they can effectively operate in the ever-changing environment.

The recruits are Ugandan citizens with a minimum of UCE (S4) Uganda Certificate of Education. Some few exceptional cases with academic qualifications below UCE were admitted because of the exceptional interest and zeal they exhibited at recruitment.

Kaweweta Recruits Training School is one of the schools under Kaweweta cantonment. Others include: Oliver Reginald Tambo School of Leadership and Pan African Centre of Excellence.