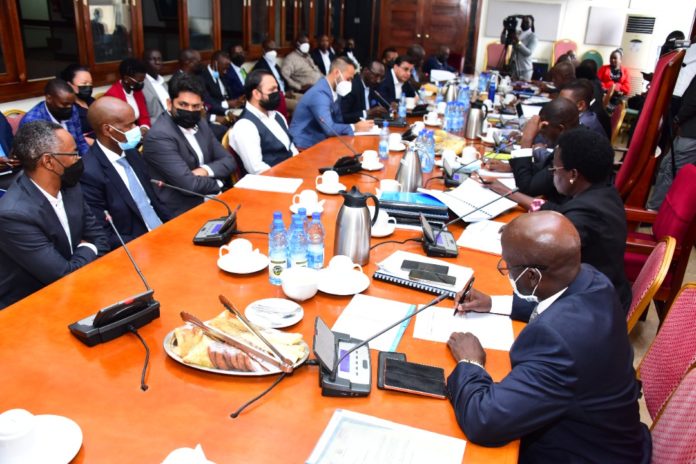 Parliament’s Adhoc committee investigating the Naguru-Nakawa land row is probing the manner in which some companies and individuals acquired land.

The committee interacted with some of the companies and individuals of interest, on Thursday, 21 April 2022, including Anil Damani, a private investor.

“The initial application was for five acres but we were informed that there were many other applicants and therefore, they reduced them to three acres – which is why our building plan was for three acres,” he said.

He said he came to know of the notice by the Uganda Land Commission (ULC) for sale of the land through his lawyers.

Damani said that in an interface with ULC, he submitted a concept plan, tax clearance certificate and proof of funds to show capability of purchasing the land and developing it.

“They told us that they did not want briefcase companies. I gave them a letter from Standard Chartered Bank showing the amount of funds I had already deposited to start the project,” said Damani.

He added that final set of costing for the project he applied for, was estimated at US$3.4 million (Shs10 billion).

“I had deposited Shs7 billion into a fixed deposit account at Standard Chartered Bank and furnished the Uganda Land Commission with certificates of deposit confirmation from the bank. This was to convince them that I was capable of taking on the project,” Damani said.

MPs, however, were unsatisfied with the explanation by Damani and his lawyers, noting that the only notice by ULC was to companies and individuals who had already expressed interest in buying the land, on which requirements to present.

Hon. Sarah Opendi (NRM, Tororo District) presented a letter to the committee which said was allegedly written and signed by Damani on 27 September 2019.

“It was addressed to the President through then State Minister for Lands, Hon. Persis Namuganza, requesting for five acres of land at Naguru,” said Opendi.

She presented another letter she said was written by Namuganza to the Chairperson of the Uganda Land Commission, directing that Damani be given five acres to construct affordable condominium units.

Damani, however, disowned the letter saying the signature thereon was not his and that he had not held any meeting with Namuganza.

The committee chairperson faulted Damani’s lawyers for giving information to the committee without documented proof, and tasked them to return with documented evidence of the process through which the land was acquired.

Asked about the amount of money he paid for the three acres of land, Damani told MPs that he paid about Shs1.001 billion and revealed that his title was processed within a week after the payment.