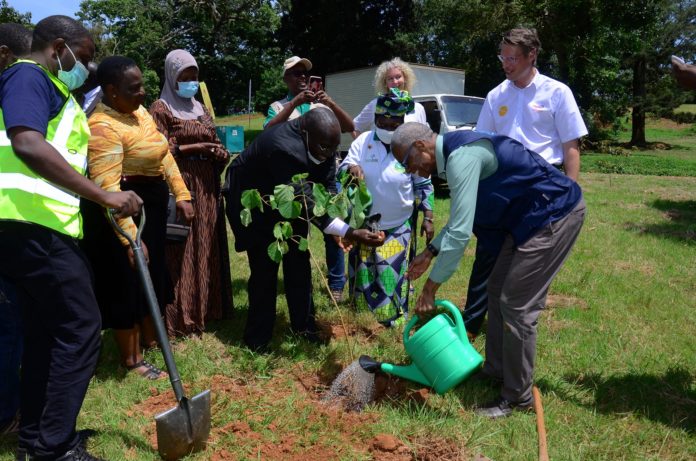 The Ministry of Water and Environment in partnership with private sector stakeholders including; Uganda Breweries Limited, Stanbic Bank Uganda, TotalEnergies EP Uganda, ATC Uganda, among others; the Development Partners, and the civil society partners have embarked on an initiative to plant One Million Trees across the country in one day, as a show of firm commitment towards the Running out of Trees (ROOTs) Campaign whose ambition is to plant 40 Million Trees per year until 2026 for the first phase of the programme.

Now in its third year, with over 25 million Trees grown to date since 2020, the ROOTs campaign brings together the public Sector, civil society and the Private Sector in concerted efforts to address a looming challenge of deforestation in the country that threatens to render Uganda more vulnerable to climate related disasters and unable to meet its wood needs by 2030, if nothing drastic is done to reverse the declining forest cover.

According to an inventory done by the National Forestry Authority in 2019, Uganda has lost half its forestry cover in the past 30 years alone, from 4.9 million Hectares to 2.5 million Hectares. For Context, the Population of Uganda in 1990 was estimated to be about 17.5 million by the World Bank and currently stands at over 48 million, projected to be at 74 million in 2040 according to a World Bank Economic Update of 2020.

This statistic gives us a glimpse into what the future could hold considering that 65% of forest degradation takes place on private land as land owners choose land use change from forestry to agriculture, industry or settlement over biodiversity conservation.

Forestry contributes six percent of the GDP of Uganda and more than 90 percent of the population depend directly on forest for their energy needs i.e. firewood & Charcoal.

This peak event in which 1 million Trees are expected to be planted in one day across the country with the national celebration at the National Plant Genetic Resources, Botanical Gardens in Entebbe, a venue, symbolic in its own right for being a treasure trove of indigenous and other tree species right on the shores of Lake Victoria.

Over 700 trees of indigenous endangered species will be planted by heads of government Ministries, Departments and Agencies, Heads of Diplomatic Missions and Intergovernmental organizations, private sector CEOs, Civil Society, cultural and religious institutions. Some of the indigenous species to be planted include; Khaya species or mahogany, Melicia species/Muvule, Afzelia, Prunus Africana, sheanut tree, Canarium species, among others. Since the event is national in character similar celebrations will be replicated across the country coordinated by the Ministry of Water and Environment regional offices, Mbale for Eastern Uganda, Kwania for Northern Uganda, Mbarara for Western Uganda while additional planting will be continued at district level by institutions and individual planters, the cumulative sum of which is expected to surpass 1 million trees mark.

Speaking at the tree planting occasion that was officiated by H.E Jessica Alupo, the Vice President who represented President Yoweri Museveni, the Permanent Secretary for Ministry of Water and Environment Mr. Alfred Okot Okidi said that whereas rate of the loss of forestry cover in the country is dire, the Ministry’s every intention is to work with the private sector, the public and other willing partners to ensure that a timely intervention like the ROOTs campaign is executed efficiently.

“The government of Uganda committed to the Bonn Challenge that confronted governments with the task of halting, reversing the worrying trend of forest loss. Here, we committed to restoring 2.5 hectares of degraded forest landscapes by 2030. Our task is great, but this mission is achievable, through strategic partnerships with the private sector whose resources sometimes give us the means and help us spread the message wider.”

The Uganda Breweries Managing Director, Mr. Andrew Kilonzo underscored the importance of the private sector coming together to address the deforestation challenge that does not only threaten Uganda, but the global ecosystem itself, saying that investing in tree growing may not be seen in the short term as good business, but it is good for business.

“We understand how crucial partnerships are in increasing the scale and impact of tree growing programmes. We were very glad to team up with the government and rally our fellow private sector organisations to join hands to generate an integrated solution to improve tree cover in Uganda. Our commitment to ROOTs started in 2019, so far we have contributed over UGX. 500 million, and our commitment remains unwavering,” he said in a statement.

Government efforts are often bolstered by deep private sector pockets and many companies have heeded the call this year to take part, some in kind by contributing tree seedlings and taking part in the actual tree planting, like the Mount Elgon Tree Planting Enterprise that has so far contributed over 3 million seedlings to the campaign.

Other key partners like Stanbic Bank Uganda have given cash contributions two years running, and this year, Stanbic has contributed 100 million shillings toward Running Out of Trees.

The Stanbic Bank’s Head of Sustainability, Cathy Adengo said that the bank’s goal is to inspire the rest of the private sector to be part of this initiative.

“Once you have a private sector that is active, involved, and engaged on a social economic issue of this scale, this will lead to greater impact on furthering the conversation and seeking solutions to a threat that not only affects individuals but businesses as well. As trees disappear, soil productivity deteriorates, affecting companies whose production processes need agricultural produce, this also affects access to clean water, clean water, and with time we will experience extreme weather events like we have already witnessed in Kasese and Bududa in the past year alone. As the private sector, we have a critical role to play in preserving and protecting our environment.”

TotalEnergies EP Uganda’s Business Development & Corporate Affairs Director, Jean GAVALDA said, “Our activity in Uganda found its roots around 3 pillars: Energies, Social and Biodiversity. For biodiversity and environment, we, together with our partners, will conserve and leave it better than we found it. We are already engaging to preserve 10000ha of primary forest and restore 1000ha forest. With our annual campaign “Grow A Tree Everywhere” (GATE), 100,000 trees will be growing in the Tilenga project areas of Nwoya and Buliisa districts. We are proud to participate and support the ROOTs campaign for a sustainable future. Today I planted another tree on earth.”

Transparency for trees grown is crucial to the ROOTs campaign. Tree growing organizations have for long relied upon manual methods and tools for tree data collection such as excel sheets and paper-based field reports that provide aggregate totals of trees grown. These methods are insufficient, because they lack immutable evidence or data on each tree actually grown. Tree Adoption Uganda (TAU), a local youth centric NGO integrates digital tree data collection for tree growing initiatives.

Dr. Charles Batte the Executive Director at Tree Adoption Uganda remarked that; “Digital data on each tree grown enhances transparency and efficiency in reporting, which improves confidence of investors, funders and the public – thus enhancing participation. Currently, we use the Tree Adoption App to collect data on each individual tree grown including; image of the tree, GPS location, date of planting, tree species, and name of the planter. Geolocation data for these trees is used for follow up and monitoring, enabling us to demonstrate impact over time”

Other private sector companies and institutions that have onboarded the campaign this year include; Bunyoro Kitara Kingdom, Buganda Kingdom, National Agricultural Research Organisation, National Water and Sewerage Corporation, NEMA, KCCA, Uganda National Farmers Federation, UNHCR, FAO, ECOTRUST, ATC Uganda among others. Tree Adoption Uganda is the tree mapping partner, whose main objective is to track the lifecycle of the tree from when it goes into the ground, and to monitor its growth through the years.

The ROOT Campaign was launched in January 2020 as a 5-year project geared towards Soliciting commitment from the Private sector to support Government’s initiative to restore forest cover to reverse the human impact on decline of forest cover. Over 25 million Trees have been grown in the years following the launch, even with the disruption that Covid-19 presented the campaign.

The campaign also seeks to elicit commitment from the Government of Uganda to gazette a National Tree Planting Day to encourage the general public to join efforts with the government and private sector in committing to restoring, protecting and replenishing forests.