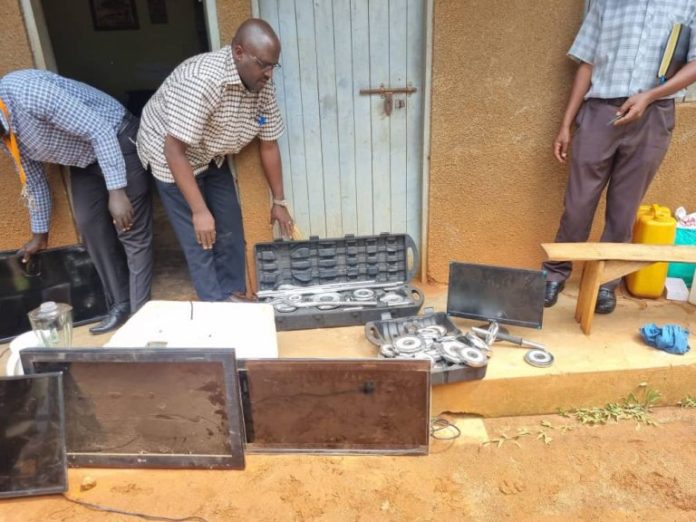 Following several complaints of robberies, burglaries, and thefts targeting electronic devices in Mukono Municipality and places along Kayunga road, Police at Mukono embarked on operations to hunt down the perpetrators.

In the last few days, the team managed to arrest four suspects whose leader has been identified as Kitanda Allan alias Lubuka.

Lubuka was arrested with his three accomplices who were found with sharp objects like Pangas commonly known as Bijambiya and the gang members were subsequently arraigned in courts of law on allegations of Aggravated robbery, burglary and theft. The group was terrorizing residents around Mukono Municipality.

Kampala metroplitan deputy policespokesperson Luke Owoyesigyire said the operations continued and on 17th June 2022, “the team intercepted people carrying suspected stolen items. A search was conducted at the home of one of the suspects identified as Nauga Reagan and Kalyango John a notorious thug who had physical wounds from gunshots believed to have been sustained during a foiled robbery in Mukono and has since been on the run.”

The same group is believed to be connected to other suspects who have been terrorizing residents in Nagalama and Mukono.

They are currently detained at Flying Squad headquarters in Kampala as investigations continue.

“We urge members of the public to always be on alert and inform their area police of suspicious characters in their communities. The Police through Community Policing will continue to strengthen its ties with the members of the public to help fight crime. We shall also trace for the owners of the suspected stolen items recovered , however we also urge those that lost their property through the crimes mentioned above to report to Mukono Police station to help identify some of their Properties just in case they are among those recovered,” Owoyesigyire urged.