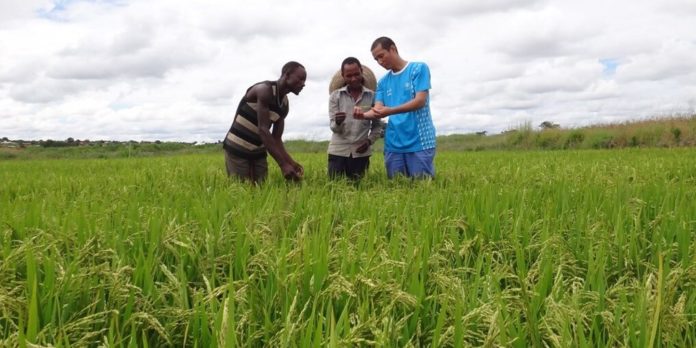 Uganda is contributing nearly $10 million (Shs37.4 billion) to the latest phase of a South-South Cooperation project focused on crop and animal production with the Food and Agriculture Organization of the United Nations (FAO) and the Chinese government after the first two phases yielded dramatic results, including a quadrupling of rice production per hectare.

In one of the most significant contributions of its kind from a beneficiary country under the initiative, the Ugandan government is putting in $9,623,703 through a Unilateral Trust Fund (UTF). This comes in addition to $2,389,138 contributed by China to Phase III of the project through the FAO-China South-South Cooperation (SSC) Programme Trust Fund.

Under an agreement signed in Kampala by FAO Representative Antonio Querido and Uganda’s Finance Minister Matia Kasaijia, the Uganda UTF will be used to support overall implementation of Phase III of the project. It will focus on four areas, namely: 1) establishment of an integrated technology transfer base; 2) development of high yielding schemes for rice and foxtail millet; 3) support for livestock improvement programmes; and 4) development of the aquaculture value chain.

“The Uganda Trust Fund contribution to Phase III of the SSC project marks a strong endorsement of the significant impact it has already had and a resounding vote of confidence in its potential for continuing improvements to the lives and livelihoods of Ugandan farmers and those who depend on them,” Querido said.

The support will directly reach a minimum of 9,600 farmers, of whom at least 30 percent will be women, as well as provide training for 200 technical officers in Uganda and China.

One project area saw a fourfold increase in rice production per hectare, while in other areas, milk production increased from 2 to 7 litres per cow per day. More than 3 000 Ugandan farmers and 80 government staff have been trained, while high-quality, low-cost fish feed techniques have increased aquaculture production.

Knowledge transfer at the heart of the collaboration

Through the initial two Phases of the FAO-China SSC Programme, 47 Chinese experts and technicians were deployed in Uganda over a two-year period, where they helped to improve technologies used to produce rice, foxtail millet, maize, grapes, apples and cherry tomatoes, as well as animal reproduction including goats, pigs, sheep and in fisheries. Projects also focused on mechanization, agro-processing and value-addition.

Study tours to China for high-level Ugandan agricultural officials and technicians have helped to build capacity, and the Programme has directly targeted female agriculturists, helping increase income and improve employment, nutrition and livelihood of thousands of farmers in Uganda.

Phases I and II were carried out under a cost-sharing arrangement between the Governments of China and Uganda and FAO. The government of China provided financial and technical resources, while the government of Uganda provided in-kind contributions, including lodging, transportation, medical services and health insurance for the Chinese staff. FAO provided technical support and backstopping, as well as project supervision and monitoring.

The FAO-China SSC Programme was established in 2009 with a USD 30 million contribution from China, followed by two further USD 50 million pledges in 2014 and 2020 respectively. The Programme has seen a total of 25 national, regional, inter-regional and global projects implemented to support agricultural development and food security, reaching more than 100 000 direct beneficiaries and several hundred thousand indirect beneficiaries at grassroots level in rural areas. Chinese experts fielded in host countries have transferred practical and adaptable technologies by providing demand-driven demonstrations and training in collaboration with local counterparts.

FAO’s successful implementation of South-South and Triangular Cooperation (SSTC) in many countries has contributed to increased food security, especially through the improvement of agricultural productivity, diversification of food crops, small animal and fish production, and rural incomes.

Over the past two decades, $435 million has been invested in SSTC projects and activities.