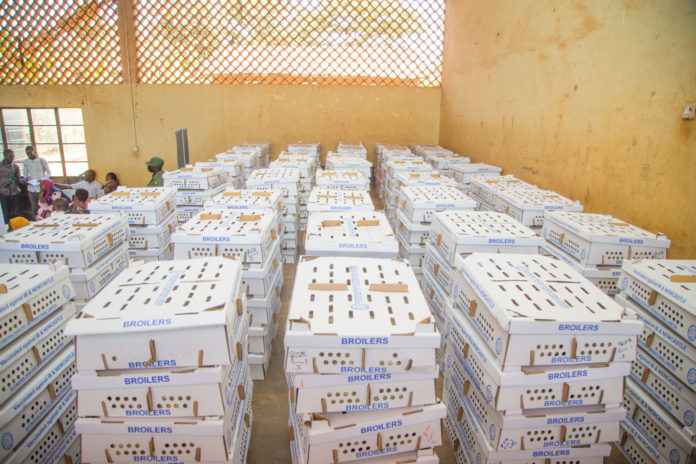 Urban farmers in Kampala City have received 176,920 chicks from the government under the National Agricultural Advisory Services (NAADS) program.

On top of the chicks, the farmers also received 197,500 kilograms of feeds to help them start off their one-day old chicks.

The inputs will be distributed across three divisions of; Nakawa, Kawempe and Makindye where each farmer will be getting inputs worth Shs1m.

For Rubaga and Kampala Central are to benefit in this financial year and this will be an addition to the value addition inputs they received early on.

The distribution of the inputs started on Monday in Mpererwe, Kawempe Division where 62,000 chicks and 85,375kg of feeds were given out to 501 beneficiaries.

Amina Lukanga the Kampala Resident City Commissioner (RCC) who handed over the chicks and feeds urged to the beneficiaries to fully utilize these inputs to transform their lives.

“Government wants the people of Kampala to be transformed and get out of poverty. This support is aimed at improving on the incomes of the benefiting households and increasing food security, Lukanga said.

She challenged the people of Kawempe not to politicise government programs but support them for their own benefit.

Slyvia Nakyobe the Kawempe Division Secretary for Gender commended government for empowering the people of Kampala.

“We want to see this program succeeding, if you need technical support reach out to our extension staff to help you,” Bashinyora said.

“The benefiting families are going to have improved incomes and welfare. They will be able to send their children to school and employ other people and their children in their poultry farms,” Kamya said.

She thanked government for providing the farmers with feeds which in the past was a challenge to many beneficiaries.

“This time government has given you the birds and feeds, so there is no excuse for not taking off,” Kamya said.

Hillary Muhesi a beneficiary asked KCCA to support them with extension workers to skill them and keep advising them on how to manage their birds.