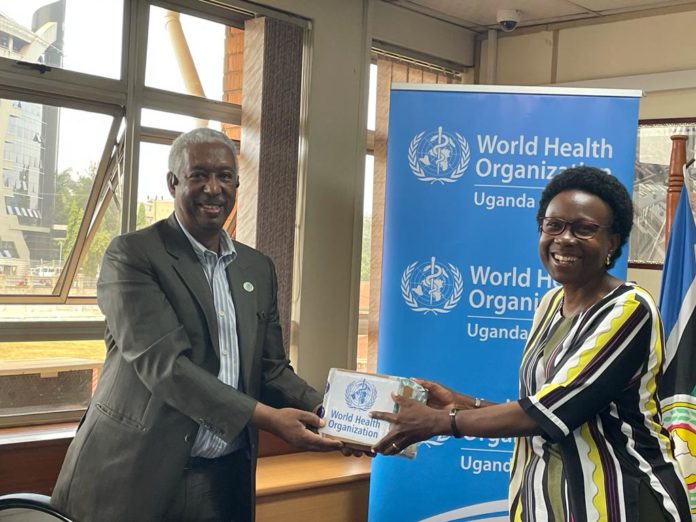 The World Health Organization-WHO has donated PCR kits to test 2,400 samples for Monkeypox in Uganda.

Receiving the test kits in Kampala on Tuesday, the Health minister Dr Jane Ruth Aceng said the donation from WHO will strengthen the monkeypox testing in the country.

“I would like to appreciate WHO for this generous contribution. We don’t have any case of Monkeypox in Uganda. However, as the country boarders DRC, we need to be prepared, strengthen our surveillance system and make sure cases are urgently identified and treated,” Aceng said.

“This is a good step in preventing the disease in the country after Monkeypox was declared a Public Health Emergency of International Concern on July 23, 2022.”

WHO Representative to Uganda, Dr Yonas Tegegn Woldemariam, said; “This PCR kits we are donating today will strengthen Uganda’s capacity to test for Monkeypox in the country. WHO is committed to providing ongoing technical assistance to strengthen surveillance, risk communication, lab capacity, and training of Health workers.”

To-date, the country has carried out 70 tests which all turned negative.

WHO also accredited three labs to carry out the testing. These include the Uganda Virus Research Institute (UVRI), National Health Laboratory Services, and the Department of Defence of the US government (in the country).

Previously, Uganda was sending samples to South Africa for monkeypox testing because of the lack of reagents.

Monkeypox starts manifesting with flu-like symptoms, fever, headache and shortness of breath. After around two weeks, the skin rash appears on some parts of the body, usually the head and hands. The rash eventually turns into blisters filled with pus, according to information from the WHO.