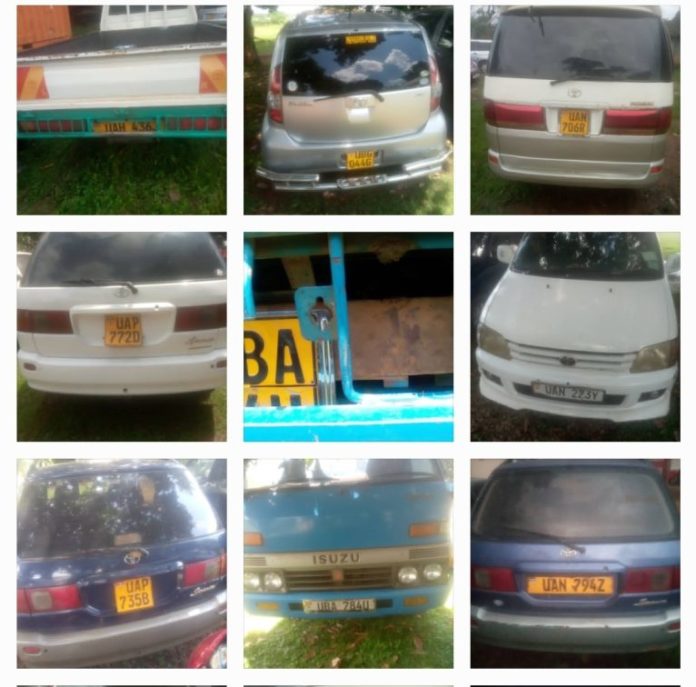 Police has recovered seventeen cars in an intelligence-led operation on car thefts in Mukono, Mbale and other districts.

The operation led to arrest of two prime suspects, who form part of the criminal racket, actively involved in the theft and robbery of motor vehicles, from parking lots, streets, functions like funerals and parties, places of worship, bars and clubs.

Fred Enanga, the police spokesperson, said the task team started its operations on July 5th from Nkonge in Mukono, following the robbery of motor vehicle registration number UAP 778G, that led to the arrest of Nsubuga Mukwaya Hassan, from Wobulenzi.

Mukwaya led the task team to the arrest of Musisi Alex alias Mark Butyampa, of Bulijjo village, Kiyunga Parish, Kyampisi sub-county in Mukono district. The suspected stolen motor vehicle, was recovered from Wobulenzi with a forged number plate UAM933G, after the original number plate was removed.

“It was further established that criminal gang was behind motor most of the vehicle thefts and robberies in Kampala, Mukono, Luwero and other parts of the country. They would change the original plates with cloned number plates (a process they call baptizing) and sell the stolen cars to Kisule Juma alias Jajja Mbale alias Muwada Juma alias Walusimbi Juma alias Wambedde,” Enanga said.

The operation was later expanded to Mbale with the help of the two suspects and led to the recovery of 16 motor vehicle in total, that are suspected stolen, from different parts of the country.

Enanga called upon persons whose motor vehicles were stolen and fall in the above categories to come and view them at the Directorate of Crime Intelligence, in Bukoto. “The task team is arranging to submit the engine numbers, chassis numbers and recovered number plates to URA for further verification and details of ownership,” he said.

Enanga added that a serious manhunt for the other accomplices is still ongoing. “We want to thank our task teams from Crime Intelligence for a job well done and also thank all persons who volunteered information about the criminal gang. We urge them to continue working with security agencies in, disrupting and dismantling such kinds of criminal gangs in their communities.”