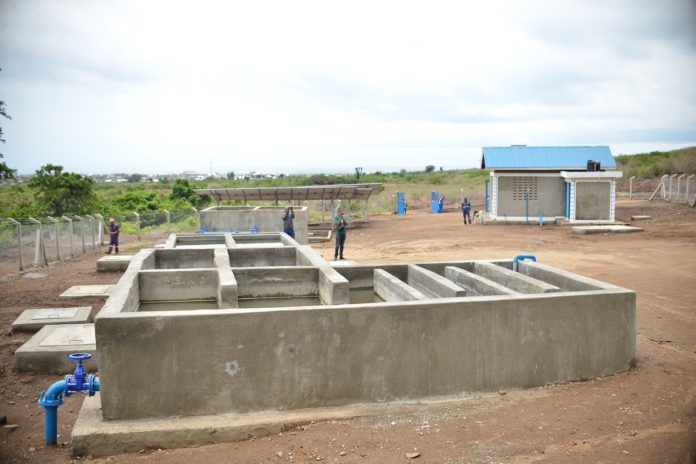 The project is aimed at providing safe and clean water to the five villages of over 13,000 residents in Buhuka flats which is the host community for the Kingfisher Development area where CNOOC Uganda Limited operates.

The project was started in February 2022 and the rehabilitation contract was awarded to SAMKA, a fully Ugandan company. Substantial completion of the project was achieved on 6th July 2022. This project included the making a detailed design of a new distribution network that incorporates some of the old scheme.

This distribution network is made up of 14km of HDPE pipes that supply water to Nsunzu A, Nsunzu B, Kyakapere, Nsonga A, and Nsonga B. The other part of the design includes a water treatment plant, a power/chemical house and the water treatment system which includes the intake unit, aerator tank, coagulator tank, sedimentation tank, sand filter and the clear water tank that is treated using chlorine to make it safe and then pumped off for distribution to the stand taps constructed in the villages and the community market water supply system.

The water is abstracted from river Masika for which the National Environment Management Authority granted a license for abstraction of 180m3 an equivalent of 9000 twenty liter jerry cans of water per day for treatment and supply to the community. For sustainability and ease of making the project fully community run and owned in future, the electronic equipment of the facility are run on renewable energy which is solar that is abundant in the area. The facility has an array of 38 solar panels.

Enoth Tukamushaba the project engineer described the project as a very big contribution to the community that will improve the livelihoods of the user community; he also said that three local residents from Kyakapere, Nsunzu and Nsonga have been trained in operation and maintenance of the facilities. This is to ensure that even when the SAMKA engineers handover and leave the project to the community, the community can fully and ably run it.

Residents that have used the water from the new system have described the water as a very considerable improvement from previous water sources that were unreliable and whose water safety was not guaranteed. They are happy to be able to have clean water taps near their homes.

The LCI chairman of Nsonga A village, Babihemaiso Dismus expressed the same views as the community saying that the livelihoods of the community members has greatly benefitted from the project. They stressed the benefit of prevention of various water borne diseases that had pledged the villages in Buhuka flats like typhoid, dysentery and other skin diseases. This therefore makes the community better.

“We have set up water user committees that will be in charge of monitoring the water distribution system and maintenance of good working conditions of the taps in the different villages.”

He urged the community to take good care of the facilities to ensure that the project runs for many years to come. He applauded the local leaders that have rendered support for the different projects aimed at improving the standards of living of the area and for the continued support to CNOOC Uganda Limited in its operations.

He reaffirmed CNOOC Uganda Limited’s commitment to being a good neighbor and always striving to create Win-Win relationships with the local community. Mr. Chen concluded his speech saying that “CNOOC Uganda Limited is committed to the efficient and effective development of the Kingfisher Development Area in a healthy, safe, environmentally friendly and sustainable manner.”

Mr. Peter Banura LCV Kikuube District commended CNOOC Uganda Limited for always paying attention to the community needs and lending a hand, especially in things that improve the wellbeing of the community.

Banura lauded CNOOC Uganda Limited for strictly following the laws of the country and international best practices while implementing the project.