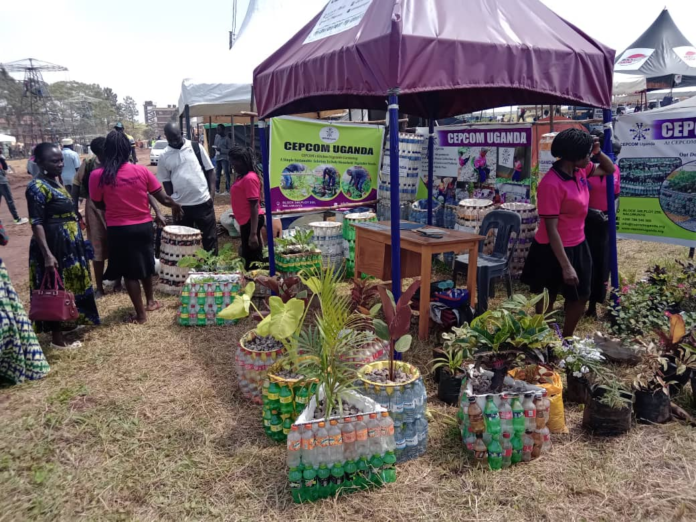 The Executive Director of Center for Peace and Conflict Mitigation Uganda (CEPCOM-Uganda), Stephen Kuteesa has urged the government to show political will to conserve the environment.

Kuteesa avers that the government is taking long to implement policies on, for instance, prohibition of plastic production to save the environment from the glaring side effects of plastic waste pollution.

Kuteesa made the call while speaking at Buganda Tourism Expo being hosted for 10 days at Lubiri Palace, Mengo.

Uganda currently generates over 600 tons of plastics every day. However about 41 percent is recycled and 51 percent of this is littered, hence posing a threat to the environment. The poor disposal of waste in drainage channels has resulted in clogged and contaminated water sources, flooded drainage channels, and plastic waste polluted land for agriculture.

The above dangers, according to Kuteesa, are the force behind CEPCOM’s efforts to collect plastics and handle them in a useful manner in partnership with communities and other stakeholders.

Kuteesa said if a community fails to protect the environment and cut trees for charcoal, people will continue to face floods and landslides. “If we indiscriminately keep on disposing of waste especially plastics and clog up in water channels, we shall have floods. When you see floods and drought, just know that somebody has been cutting trees. Clogged flooding comes as a result of indiscriminate disposing of waste,” he said.

According to Kuteesa, CEPCOM is mobilising and sensitising communities about the dangers of poor waste disposal. Their engagements, and operations, he said, are based on communities that collect plastics thrown on the roads and other areas like garbage pits and landfills.

He said that it is everyone’s responsibility to protect the environment.

“We mobilise and empower communities to be the primary champions in fostering activities geared towards protection, conservation and regeneration of the environment. We also organise sports activities on various themes about environmental protection.”

Kuteesa said some of the activities have been held in Entebbe Municipality and Makindye Ssabagabo Municipality. “This is all aimed at rallying people to conserve, protect and regenerate the environment,” he said.

He said since 2009, EPCOM has done remarkable projects under plastic recycling and reusing, adding that the organisation has empowered communities in various cluster groups composed of women, youth and men.

“The groups have since been introduced to the fact that what we term as waste, can be used as a source of livelihood and many have benefited from the mooted idea, ” he said, adding that the youth collect all sorts of plastics which the organisation buys in accumulated volumes.

Kuteesa says other groups do the sorting of the plastics gathered. “The sorting is done according to colors, size and density,” he says.

In partnership with GIZ, EPCOM, he said, skilled other youth to reuse plastics by transforming them into useful items like dustbins from used plastic bottles, flower vessels, kitchen gardens.

EPCOM has since put its emphasis on adding value to the collected plastic materials to save Ugandans from huge taxes and cost they pay to foreign plastic manufacturing companies.

“The plastic material is crushed, exported and is returned as new bottles. We aim at acquiring machines and producing products ready for use,” Kuteesa said.

Before the outbreak of covid-19 pandemic, Kuteesa said they used to collect 30 tons of plastics every month but currently the tonnage has drastically decreased to 15 tons. The decrease is alluded to the reduction in consumption due to economic hardships that the country is facing.

He said Ugandans need to change social behaviour and mindsets and know that throwing a bottle along the way while travelling is littering the environment.

For instance, someone going to Mbale buys a soda, removes the lid and drops it in Nakawa, a bottle in Mukono and a label in Mabira. That means he has littered three places. We want taxis and car owners to have small containers where passengers can dump the waste,” he said.

“When you go to dumping places, you find all sorts of waste. You find medical waste, glasses, plastic and others. We need to sort our waste because they can become a source of income,” he said.

Kuteesa said Ugandans living in the mountainous areas should not cry about landslides when they are cutting trees.

Kuteesa said the government should show the political will to conserve the environment, noting that the country has the best conservation laws and guidelines.

He urged the authorities to work together to mitigate all forms of climatic change.

Established in 2009, CEPCOM-Uganda has been working to promote peaceful coexistence and unity among Uganda’s very diverse communities, while creating opportunities for socioeconomic improvement for children, youth, women and other vulnerable groups within those communities.