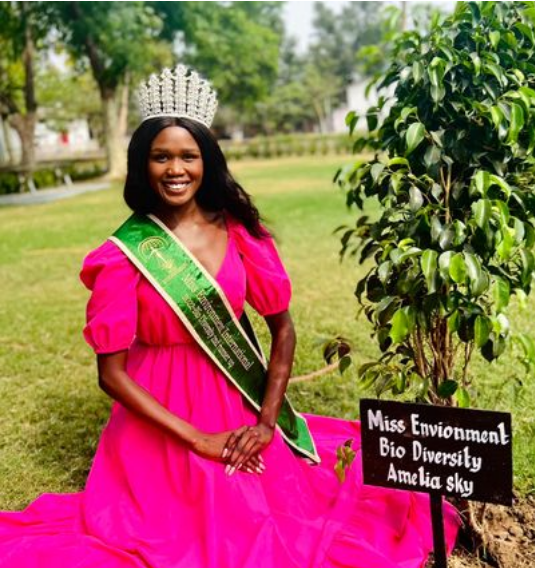 Her elder sister Ebony Aboud said the catwalk supermodel commonly known as Amelia Sky passed away due to Anemia and throat infection, immediately after his arrival from Yambio.

“She took a boda-boda to bring her to Juba because there was no bus coming to Juba due to security issues. She took three days to reached Juba, and in a process, she got sick because of heavy rains and dust,” said Ebony.

“She died in Juba while being taken to the hospital,” she added.

The beauty queen reportedly traveled to Yambio four months ago after her father died.

According to Ebony, her sister went home to pay respect and build the tomb of their father who had died in her absence.

A kindergarten teacher, who studied business and accounting at the American School of South Sudan in Juba, Amelia has also represented South Sudan at international modelling competitions, where she won awards.

She contested for South Sudan at World Miss University 2017 in Phnom Penh, Cambodia and also competed at Top Model of the World in El Gouna Egypt in July 2017, where she finished among the Top 10.

Again in March last year, she represented her country at the Top Model of the World 2020 in Hurghada, Egypt but she was unplaced.

On August last year, she represented South Sudan at Miss Supranational 2021 in Nowy Sącz, Małopolska, Poland and was named the Top Model of Africa.

On April 2, 2022, she represented South Sudan at Miss Environment International 2022 in Mumbai, India. She was second runner-up to Kayra Wouters of Belgium and was crowned Miss Biodiversity 2022.

Her sister, Ebony said Amelia hastily left Yambio for Juba because she was supposed to travel to Germany for her modelling career.

“She has always been a pillar of our household, and the family depended on her for everything,” said her emotional sister.

“She was very strong, kind and everyone love her specially when she travels abroad to represent South Sudan.”