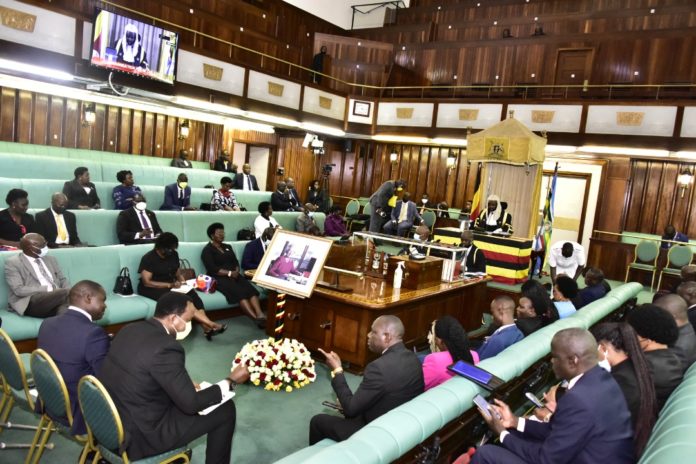 Parliament has paid tribute to the late Queen of England, Elizabeth II, describing her leadership as extraordinary in the development of the Commonwealth.

The tribute was held during a special sitting on Wednesday, 14 September 2022, chaired by Deputy Speaker Thomas Tayebwa. It preceded a moment of silence observed by Members of Parliament in honour of the late monarch.

Queen Elizabeth who reigned for 70 years, died on 08 September 2022 in Scotland, and was replaced by her eldest son, King Charles III.

During the sitting attended by the British High Commissioner to Uganda, H.E. Kate Airey, and other dignitaries, the late Queen’s portrait was placed adjacent to the mace – the Speaker’s symbol of authority in the House.

Robinah Nabbanja, the Prime Minister of Uganda, moved the motion to pay tribute to the late Queen saying that she had presided over the Commonwealth with distinction and that throughout her reign, she played an important role in unifying the UK and people across the globe.

According to Nabbanja, during her reign, the Queen visited almost every country of the Commonwealth, two of which were made to Uganda from 28 to 30 April 1954 and later on 21 to 24 November 2007.

“Her visits to Uganda exhibited passion and commitment and contributed immensely to Uganda’s development and global standing as exemplified by the ability to host international conferences, and ultimately encouraged direct investment and tourism, along others,” said Nabbanja.

Deputy Speaker Thomas Tayebwa described the late Queen as an action-driven monarch, who served with passion and commitment something that left the world in admiration.

Representing the Leader of the Opposition, Muhammad Muwanga Kivumbi, the Butambala County MP said that there is a need to recall the address of Queen Elizabeth to the Parliament of Uganda in which she called for the supremacy of parliamentary democracy.

He also said that the death of the Queen should be a lesson to Uganda to ensure a laid down transition process once a Head of State leaves power.

“The success of her reign affirms the validity of cultural institutions in advancing social transformation and development, political leaders should not perceive them as antagonistic,” he said.

Kabula County MP Enos Asiimwe, said that the Queen was a strong advocate for the young people and their development.

According to Oliver Katwesigye, the Buhweju Woman MP, the Queen, who led both as a mother and one of the world’s most powerful people, had raised her children responsibly.

The Hansard of the special sitting will be furnished to the British High Commission for conveyance to Buckingham Palace.