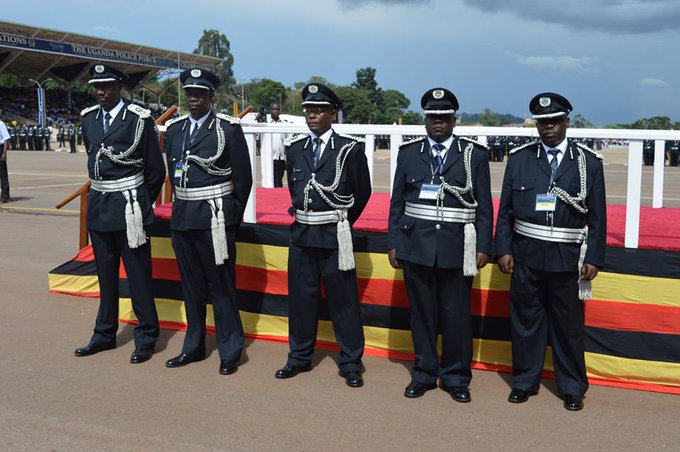 Five police officers at the rank of Assistant Inspector General of Police (AIGP) have officially retired from the Uganda Police Force.

They retired following the expiry of their contracts. The officers had re-applied for an extension but the President never responded to them, despite responding to others and granting an extension.

The retired officers include; Asan Kasingye, Edward Ochom, Asuman Mugenyi, Andrew Sorowen, and Erasmus Twakuhirwa all at the rank of AIGP, were seen out of police at an event presided over by the Inspector General of Police Martins Okoth Ochola at Police headquarters Naguru.

IGP Ochola applauded the retiring officers to consider the send-off function as a collective token of appreciation for a great journey of their achievements and reflect on the extraordinary privilege of serving the country and the world.

“After many years of strenuous police duties, you are now relieved from the compulsory strains with honor and dignity, and it is for this reason that the men and women still in uniform, should look at you with admiration and gratitude for a job well-done,” Ochola said.

He also implored the officers to remain honest to themselves, humble and compassionate to fellow beings, affectionate to family members, and sincere to everyone.

“I, therefore, call upon you to always see yourselves as good emissaries of the Uganda Police Force and never allow any selfish interest to blemish the integrity, wisdom, and courage you have nurtured over the years in this great disciplinary institution,” he said.

“Let me once again thank each and every one of you for your valuable contributions to the UPF. It was a pleasure for all of us to work together on every occasion,” he added.

The IGP Ochola also called upon the men and women still in uniform, to look at the retired police officers with admiration and gratitude for a job well done.

AIGP Asan Kasingye said that this was a big day for them and wished all the retiring colleagues a happy and prosperous retirement.

“Big day today for us. I wish all retired Police Officers a happy & prosperous retirement. Thank you for your patriotism, hard work, and giving the best part of your lives to serve Ugandans. Thank you Uganda Police for a big send-off. May God bless us all,” he said.