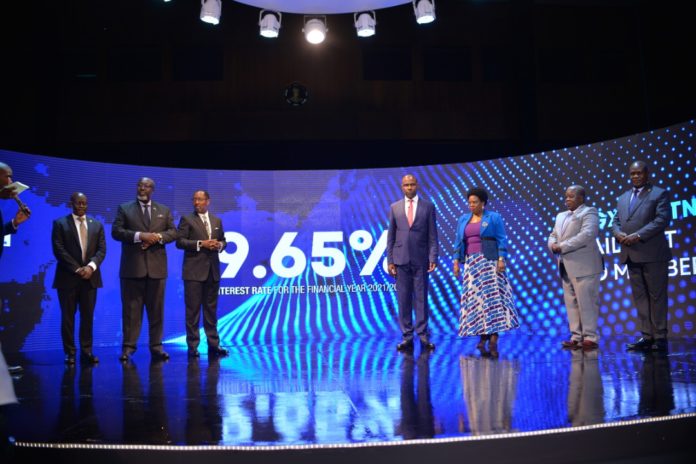 The National Social Security Fund (NSSF) has announced a 9.65 per cent interest rate for its members for the year ended 30th June 2022.

This was declared by the Minister of State for Finance (General Duties), Mr. Henry Musasizi during the 10th Annual Members’ Meeting held at Kampala Serena Hotel today morning.

“In exercise of the powers conferred on me by section 35 of the NSSF Act, I have the pleasure to declare an interest rate of 9.65% to be paid as interest to the members of the fund for 2021/22,” Minister Musasizi announced.

The interest rate translates into Shs1.38 trillion in total which will be credited to the members’ accounts.

The rate is however lower than the 12.15 per cent interest paid by the Fund in the previous financial year 2020/21 and this has been attributed to the implementation of the midterm access that was introduced earlier this year.

According to the fund’s Managing Director, Richard Byarugaba, a total of Shs1.9 trillion was paid out in midterm access benefits to members.

“The effects of the global geo-politics affected regional markets, our economy and the Fund. Our growth was slower on contributions, compliance rates dropped, real estate products became more expensive and our equity portfolio was affected, however, we remained resilient,” Byarugaba said.

The Fund balance sheet size grew by 11 per cent from Shs15.56 trillion to Shs17.25 trillion. According to Byarugaba, this growth is consistent with the combined growth in investments driven by contributions and income generated net of benefits paid out.

Byarugaba said that this year, they accelerated Real Estate projects and fostered their Environmental, social, and corporate governance (ESG) agenda through the Hi-Innovator Program. “So far we have created over 1300 jobs, 700 entrepreneurs and provided our business advisory services through the Financial Literacy Program,” he said.

The NSSF Board Chairman Peter Kimbowa said; “The future of the Fund is data, knowledge got from data and building capabilities that will provide real-time accurate and precise data around what we are doing by embracing systems thinking as we find solutions.”

Kimbowa said as a board, the road ahead is going to be marked by transforming the intra-technology company and making sure that they leverage data and will embed data and analytics to grow existing legacy projects and new ones.

“The board also considers talent as scarce capital. We aim to invest in re-skilling, multi-skilling, micro-skilling, and up-skilling as an everyday activity to have the very best that we can have,” he added.