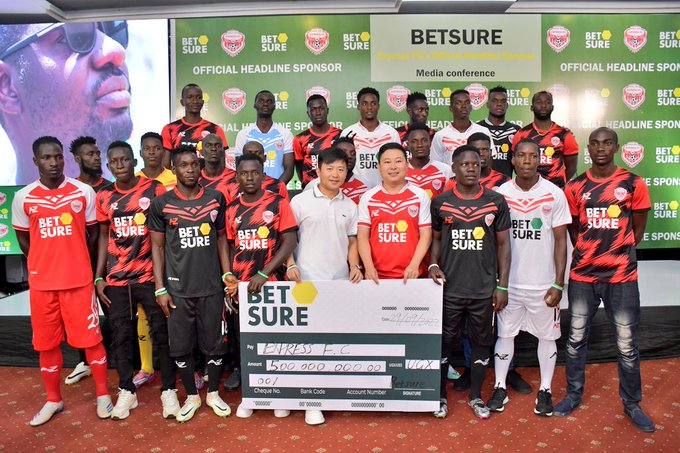 Uganda Premier League side Express FC have announced a land-mark partnership that will see online gaming platform BetSure become the club’s new headline sponsor for the next three seasons in a deal worth Shs1.5 billion.

The deal which was unveiled at an event held at Serena Hotel, becomes the biggest in the Club’s history and will see the BetSure logo feature on the front of all of the Club’s senior teams’ playing shirts and training wear, starting with Saturday’s first-team fixture with UPDF.

It was revealed that the deal will be Shs500 million each year, with an option of renewal following expiry.

The club CEO, Isaac Mwesigwa said; “The club should expect Shs400 million in cash, and there are many other tangible benefits coming like replicas, merchandise and we are happy about this sponsorship in these tough economic times.”

Speaking on behalf of the Club chairman Kiryowa Kiwanuka, Mr. Ssubi Kiwanuka (an Express FC board member) said “We call out our fans to come in numbers. BetSure is here because of them, this package is big but we’re going to utilise it fully and to players this is our opportunity to be great and there will no be other chance, Express FC is going to grow stronger and stronger.”

BetSure is a Pan-African global betting company based in Dubai, currently in 5 African countries; Uganda, Nigeria, Kenya Tanzania and Ghana. This is not the brand’s first venture into local Ugandan sports as it has sponsored local community based tournaments.