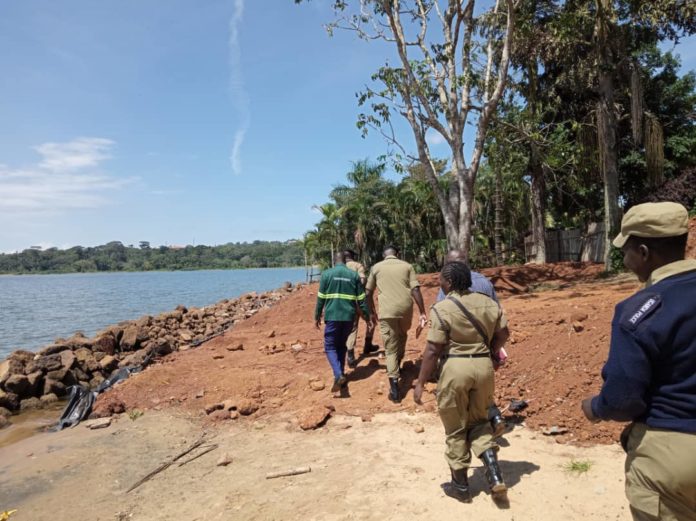 The National Environment Management Authority (NEMA) has stopped a developer from encroaching on and backfilling part of Lake Victoria with stones and murram in Entebbe.

The intervention follows a whistleblower’s outcry, including videos and pictures shared on social media about the legality of activities that were taking place on site.

A team of inspectors from NEMA was dispatched to the site this week and discovered that indeed murram and stones were being deposited into the lake and yet the developer did not have the requisite approvals as required by the law.

In a separate incident, the Environment Police also arrested 4 persons of Asian origin who were found backfilling a wetland near Kajjansi Airfield. A truck found on site was also deregistered.

“For both cases our inspectors discovered that the developers had not undertaken Environment and Social Impact Assessment, contrary to provisions of the National Environment Act, No 5 2019. The Environment Protection Police Unit has commenced investigations into the matter to bring other suspect(s) who are still at large to book and the process of prosecution has been initiated,” the environmental body said in statement.

Wetlands and lake shores are a vital part of the ecosystem. They are habitats for species, perform unique hydrological functions such as regulation of water quality, reducing soil erosion and aiding in flood control. Despite these important ecological functions, such critical ecosystems have been a target for encroachment especially for settlement, agriculture and other developments.

“We thank the public for being watchful and commend vigilant members of society who often show concern about environmental breaches within communities. Together, we shall halt degradation and jointly restore our environment,” NEMA said.