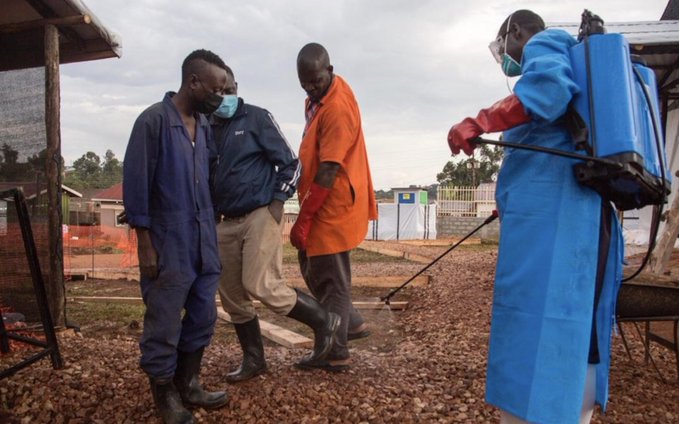 Ministers of Health and government representatives from 9 African countries agreed on joint measures to stop the potential spread of the ongoing Ebola disease outbreak in Uganda and beyond its borders.

An assessment conducted by World Health Organization (WHO) found that the risk of the Sudan ebolavirus spreading to neighbouring countries as high due to cross border movements between Uganda and other countries. The population is mobile due to trade, social and cultural connections. In addition, the country hosts many refugees who continue to keep ties with their countries of origin.

Recognizing the importance of collaborative efforts, the Government of Uganda, with support from the Africa Centres for Disease Control and Prevention (Africa CDC) and WHO today hosted a High-Level Emergency Ministerial meeting on Cross Border Collaboration for Preparedness and Response to Ebola Disease Outbreaks in Kampala.

The meeting concluded with a communique in which Ministers of Health and senior government officials from Burundi, the Democratic Republic of the Congo, Kenya, Liberia, Rwanda, Sierra Leone, South Sudan, Tanzania and Uganda endorsed key measures to prevent the cross-border spread of the Sudan Ebolavirus. These include disease surveillance, contact tracing and monitoring, prompt alert notification, information sharing and joint trainings of emergency responders, as well as carrying out simulation exercises to enhance preparedness and response.

“Uganda has experience in managing epidemics and since the beginning of this Ebola outbreak, with the support of our partners, we have taken measures to limit the transmission of the disease. Sharing experience and strengthening collaboration between our countries will enable us to respond quickly and efficiently to health emergencies affecting our countries,” said Hon Dr Jane Ruth Aceng Acero, Uganda’s Minister of Health.

Uganda declared an outbreak of the Sudan ebolavirus on 20 September 2022, marking the first time this species – one of the six under the Ebolavirus genus – was detected in the country since 2012.

“One of the crucial lessons Africa has learnt from previous Ebola outbreaks is that by uniting, we stay a step ahead of the virus. Through sharing information and resources, countries can go from firefighting to building an outbreak firewall and halting the spread of infections,” said Dr Matshidiso Moeti, WHO Regional Director for Africa. “The joint efforts agreed upon today place Uganda and the region on the road to breaking Ebola’s grip.”

The outbreak has affected five districts, and as of 12 October 2022, 54 confirmed cases and 19 deaths have been reported. With the intensifying response, more than a thousand contacts have been identified, while 20 people have recovered from the disease.

“We as a continent must work together to plan, prepare and respond to the Ebola outbreak and other public health threats through resource sharing, regional efforts to build resilience capacity of human resources, strengthening laboratory systems, surveillance, treatment and care,” said Dr Ahmed Ogwell Ouma, Acting Director General of the Africa CDC, emphasizing the need for collaboration efforts in ensuring health security of the Eastern Africa region and beyond. He also called for action to support the implementation of the Africa New Public Health Order.

The Ministers of Health also agreed on joint plans to carry out cross-border readiness, including raising public awareness and conducting community engagement campaigns. They also agreed to the rapid cross-border deployment of medical personnel to tackle the disease.

As no effective vaccine against the Sudan ebolavirus has been licenced yet, Ugandan health authorities have focused on supportive care for confirmed cases alongside stepping up testing, surveillance, infection prevention and control, as well as collaborating with communities to support disease prevention measures.

There are at least six candidate vaccines against Sudan ebolavirus, which are in different stages of development. Three of them have Phase1 data (safety and immunogenicity data in humans), and the remaining are in the preclinical evaluation phase.