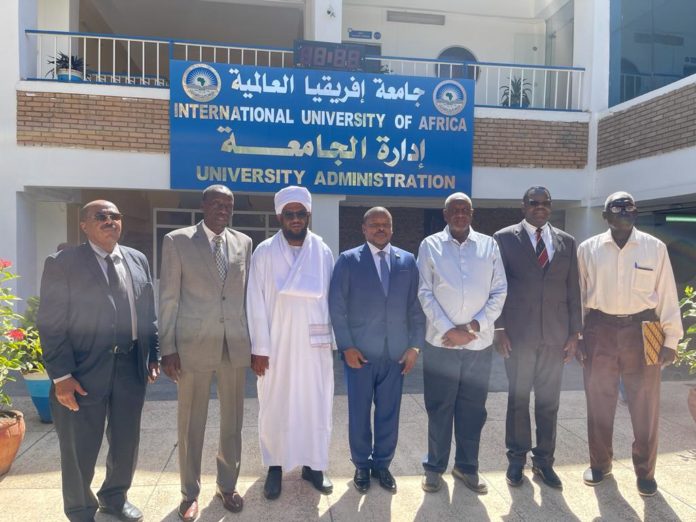 The International University of Africa has offered scholarships to Ugandans pursuing courses in science and technology. The awarding of scholarships followed Dr. Rashid Yahya Ssemuddu, Uganda’s Ambassador to Khartoum’s visit to the University in a bid to strengthen the relationship with Uganda.

Ambassador Ssemuddu applauded the University for having an initial impact on his life when he first left Uganda in 1989 to study for a year in Sudan before proceeding to the University of Medina in Saudi Arabia where he studied for 18 years completing with an award of a PhD in Sharia Law and Islamic Jurisprudence.

He requested the University to continue providing opportunities to Ugandan students especially those who are highly talented and economically disadvantaged with a focus to promote Uganda’s development through science and technology education.

The scholarships that will initially be granted to the top five Ugandans in the department of Minerals Science and Petroleum Studies, Engineering, Medicine and Nursing Science were announced during the meeting by the University’s Head of External Relations, Taj Adin Bashir Niyam who informed the Ambassador of the good relationship IUA enjoys in collaborating with Makerere University Kampala (MUK) Islamic University In Uganda (IUIU) and Kampala International University (KIU).

The University’s Vice Chancellor for Administrative and Financial Affairs, Professor Hatim Osman Mohammad Khair who welcomed Ambassador Ssemuddu to the International University of Africa reaffirmed the pleasant relationship between IUA with the riding bilateral relations between Sudan and Uganda which resulted in many Ugandan students being awarded scholarships to study at the institution.

He said the university has a total of 120 Ugandan students currently pursuing their studies in different faculties and that Ugandan students are among the best performing and well-disciplined at the University. He further noted that many of the Ugandan students who graduated from the International University of Africa are doing very well in their individual lives while positively impacting societies wherever they live and work.

It was all tears of joy when Ambassador Dr. Ssemuddu came face to face with one of the long-serving professors, Dr Muhammad Abdulmaruf Mahjub, a teacher who taught him way back in 1989 while still a teenager and is still lecturing at the same University and he is the current Dean of Students Affairs.

Ambassador Ssemuddu used the opportunity to meet and encourage Ugandan students after his meeting with University Administration.