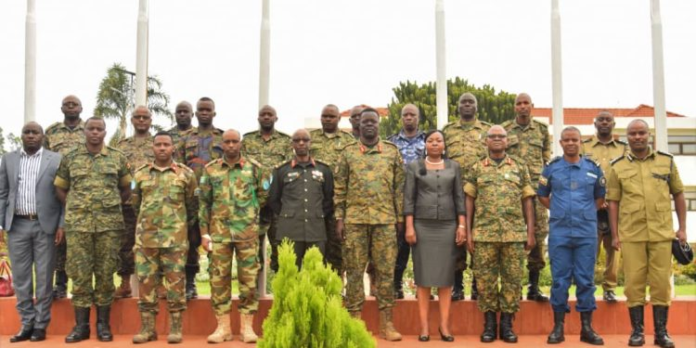 The Uganda Peoples’ Defence Forces Chief of Staff – Land Forces, Brig Gen Bob Ogiki has reiterated Uganda’s commitment towards the cause of the Eastern Africa Standby Force and other International organizations.

Brig Gen Ogiki made the remark while addressing a delegation of the Eastern Africa Standby Force (EASF) at the Ministry of Defence and Veteran Affairs headquarters in Kampala.

The delegation is in Uganda on a Verification of Pledge Capabilities by the Republic of Uganda.

“We are very committed to this and we share the cause as one of the pillars of our ideological orientation as a country, which is Pan-Africanism. Uganda believes in Pan-Africanism and we have been involved in trying to mitigate the impact or even stop conflicts around the globe,” said Brig Gen Ogiki.

He noted that Africa still faces a number of conflicts and re-echoed that out of the over 295 conflicts after the Second World War, 30 of the major conflicts have been in Africa in form of civil crises, or inter-state conflicts, while some of them have been enjoined for over 2 decades.

He added that it was against this background that regional leaders resolved that the Eastern Africa Standby Force came into effect, which called for Partner States to pledge what they would contribute towards the Force.

The EASF Force Commander Brig. Gen Vincent Gatama, in his remarks, thanked capability commanders for their impressive and professional presentations that gave the delegation a feel of the capabilities of Uganda’s capacity towards its contribution to the Eastern African Standby Force.

He added that each Partner State is required to show its commitment to the Eastern Africa Standby Force and demonstrate political will , among others.