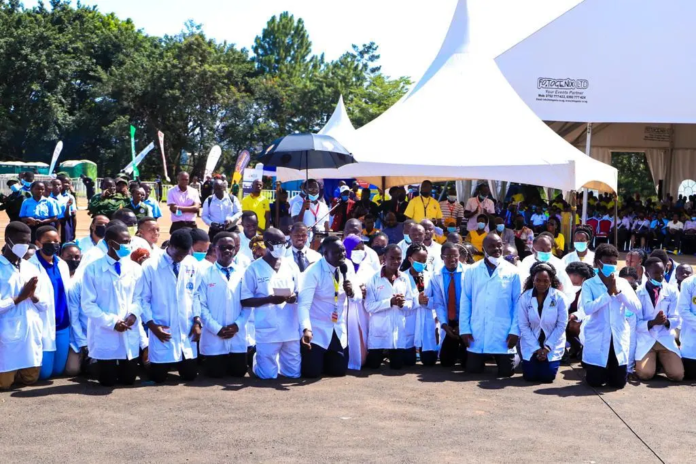 The Uganda Medical Association (UMA) has called for the censure of their president, Dr. Samuel Odong Oledo, for leading a group of medical practitioners to kneel before President Museveni and appealing to him to contest again in 2026.

In a statement sent to the UMA executive members, it seeks for the possibility of censuring Dr. Oledo with the association, which brings more than 7,000 Medical Doctors together, disassociating itself from their president’s actions.

“Uganda Medical Association National Executive Committee (UMA NEC) had two separate meetings about the incident in which the U.M.A President, was recorded in a clip making several statements at the NRM Youth Symposium at Kololo, alongside some medical students and nurses; persons who do not represent. U.M.A NEC or U.M.A at that meeting,” UMA said in a statement signed by Vice President Dr. Edith Nakku-Jolaba and Dr. Herbert Luswata, the Secretary General.

“The UMA NEC agreed and would like to state that the Uganda Medical Association is non-partisan and therefore does not participate in political activities of a partisan nature. The U.M.A respects, honours and is committed to service to its members and to the public as an association of professionals promulgated under the laws of the Government of Uganda,” they added.

UMA said Dr Oledo attended the particular meeting in his personal capacity but not as UMA and his communications at that meeting were not representing the official position(s) of UMA.

“Uganda Medical Association dissociates itself from any partisan political actions or acts, and is constitutionally required to do so. UMA is committed to remain neutral to and to serve all Ugandan doctors and persons from the political dispensations of, and in Uganda and globally. 4. UMA NEC remains committed to the mandate given to it by all its members and requests the Medical Fraternity and the public whom U.M.A serves, to keep calm as our internal systems handle this matter with the utmost care and the trust that the Medical doctors and the people we serve have given us,” they added.