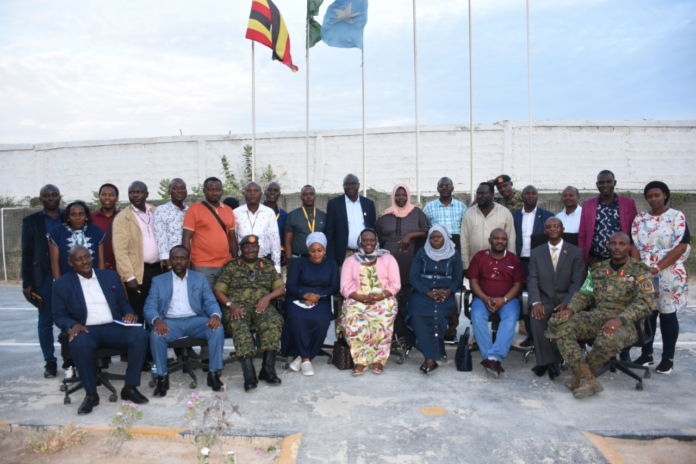 Members of Parliament (MPs) attached to the Defense and Internal Affairs Committee have begun a five-day visit to Uganda Peoples’ Defense Forces (UPDF) troops in Somalia in fulfillment of their constitution mandate.

This visit is aimed at assessing the performance of the troops in the mission area and the challenges therein.

The Minister of State for Defense in charge of Veterans Affairs, Oleru Gudu Abason who led the delegation while addressing UPDF soldiers in Mogadishu, the capital of Somalia, applauded the President and Commander In Chief (CIC) of the UPDF HE Gen Yoweri Museveni for advancing a Pan-Africanism plan aimed at attaining and maintaining peace across Africa.

She further thanked UPDF troops for their support, sacrifice, discipline, commitment and hard work, among others. “I want to take this opportunity to thank our CIC for his visionary idea to advance the Pan-Africanism plan and also applaud UPDF for your effort, discipline and sacrifice that has ensured the success of the CIC plan to bring peace not only in Uganda but across Africa,” Oleru noted.

She assured troops that their mission allowances will soon be paid.

Oleru added that salary enhancement for all UPDF soldiers is in the process.

The committee Chairperson and also Woman Member of Parliament, Rose Nyakikongoro acknowledged troops for their resilience and mentioned that the committee’s role is to look into issues of troops, apportion a budget for the Defence Ministry and ensure that the passed budget is put to good use.

The UPDF Contingent commander in Somalia Brig Gen Keith Katungi welcomed the MPs and assured them of safety.

“As UPDF, security is our business where we invest to harvest peace as profits,” Brig Gen Katungi remarked.