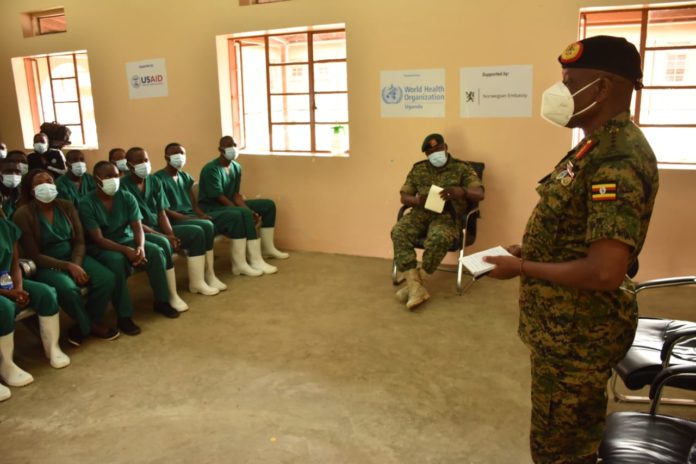 The Chief of Defence Forces (CDF) Gen Wilson Mbadi has commended the Chieftaincy of Medical Services for their role in fighting the deadly Ebola Virus Disease.

Speaking to doctors, nurses and other specialists who have been treating Ebola patients at Entebbe Regional Treatment Center, Gen Mbadi praised the withdrawing medics for a job well done.

The withdrawn team of 25 medics, both military and civilians, were urged to remain on standby until the country is declared Ebola-free.

The CDF expressed his gratitude to the US Government, Ministry of Health and other Development Agencies for their role in enhancing defence capabilities, which includes; timely response to crisis or pandemics, among others. “Your effort has enabled the investment sector to thrive without any set back, tourists are still coming into our Country since the Ebola Virus has tremendously been mitigated,” remarked Gen Wilson Mbadi.

He concluded by noting that UPDF is a professional and disciplined force with vibrant health system, and acknowledged the President and Commander-In-Chief of the UPDF H.E Yoweri K Museveni for his role in building a professional army that has protected the country.

He reported that 29 cases were confirmed at the treatment unit, 6 of which were children, had 25 recoveries and 4 confirmed deaths.

The Director for Clinical services (MOH) Dr Charles Olaro thanked UPDF for the patronage and sacrifice.

On their part, medics commended UPDF for prioritizing health matters.

In addition to the constructed treatment unit; UPDF, MOH and Development Partners also trained medics and donated protective equipment, among others, to medics at Entebbe Regional hospital.