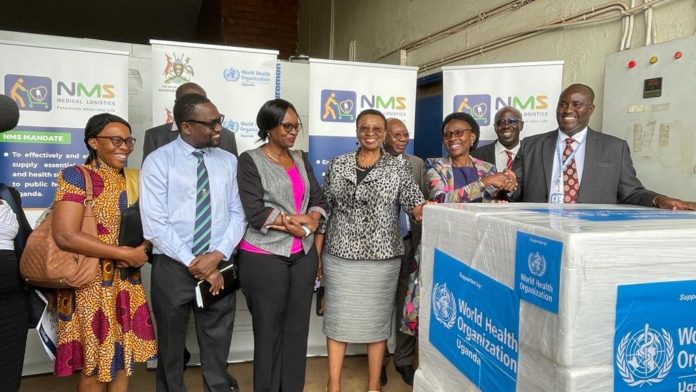 Uganda has received 1200 doses of vaccines from World Health Organisation (WHO) which will be used in the Ebola vaccine trial. This is the first batch of the three candidate Vaccines against the Sudan Ebola virus.

The three vaccines Oxford from the United Kingdom, Sabin and Merck from USA will be evaluated for their efficacy.

The Minister of Health, Dr Jane Ruth Aceng said the country has not registered any new confirmed Ebola case in the last nine days but encouraged scientists to continue research of appropriate drugs and vaccines to prevent future outbreaks.

“It is nine days today that we have no new cases of Ebola, but that does not mean we are out of the outbreak. Uganda encourages scientists to continue research to support the provision of appropriate drugs and vaccines to prevent future outbreaks,” Jane Ruth Aceng said.

Since Uganda declared an Ebola outbreak on September 20, cases have spread across the country, including to the capital Kampala, and have claimed over 50 lives, with 22 more believed to have died before their samples were tested.

“This is a historic day for the country and the world of scientific health research. For the first time, vaccines for clinical trials are produced in less than 90 days after the start of an Ebola Outbreak. This is a remarkable effort!” the WHO Uganda incident manager, Dr Charles Njuguna said.

Uganda has been struggling to rein in the outbreak caused by the Sudan strain of the virus, for which there is currently no vaccine. But UN health agency chief Tedros Adhanom Ghebreyesus in November told reporters that vaccine trials would soon begin.

Speaking from the G20 summit in Indonesia, Tedros said a WHO committee of external experts had evaluated candidate vaccines and determined “all three should be included in the planned trial in Uganda”.