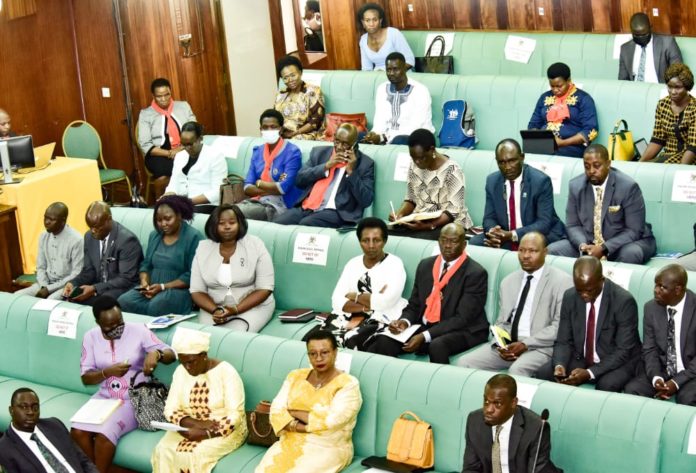 Government is urged to carry out extensive restructuring and pay reforms in the Ministry of Public Service in a bid to streamline salaries of public servants.

This arose against the backdrop of the debate of the report of the Committee on Public Service and Local Government on the petition on salary enhancement and discrepancies for nurses and interns during a plenary sitting on Thursday, 08 December 2022.

MPs tasked government to fast-track the Salary Review and Enhancement Commission that will scrutinize salaries for all public officers to curb a back-and-forth discussion on the same.

“There is no uniformity in the way salaries are enhanced. We recently talked about putting in place a Salary Review Commission because it’s not only health workers who are crying over salary increments, all other sectors are affected. Every sector is now coming up with petitions on salary enhancement, we want a once and for all solution to this problem,” Hon. Judith Alyek (NRM, Kole District) said.

Tororo District Woman Member of Parliament, Hon. Sarah Opendi demanded that government overhauls the current public service structure and adopts a new practical structure that can accommodate the demands of the current population.

The Leader of Opposition, Hon. Mathias Mpuuga who described public service as a place of “organised chaos” said the necessity to structure Uganda’s public service is long overdue.

“The entire public service is chaotic; you have medical workers’ pay enhanced on paper but in reality, the release is of the old wage bill. Somebody is running away from responsibility by making pronouncements that can’t be followed up by actual implementation,” he said.

The report of the committee presented by the Chairperson, Hon. Godfrey Onzima noted that whereas government has enhanced salaries of medical workers for financial year 2022/23, the funds being disbursed in some local governments are still based on the previous wage bill before the salaries were enhanced leading to wage shortfalls.

However, State Minister for Finance (General Duties), Hon. Henry Musasizi reaffirmed that as of July 2022, all scientists including health workers have been receiving their enhanced salaries as per the 2018 Collective Bargaining Agreement with government.

“We enhanced all salaries for scientists across the board including the nurses…Whatever is not going well can be resolved administratively among MDAs which are implementing,” Musasizi said.

State Minister for Health (Primary Health Care), Hon. Margaret Muhanga said the discrepancy in salary payments of health workers has been fuelled by a system failure at the Ministry of Finance which she said is being addressed to capture all medical workers.