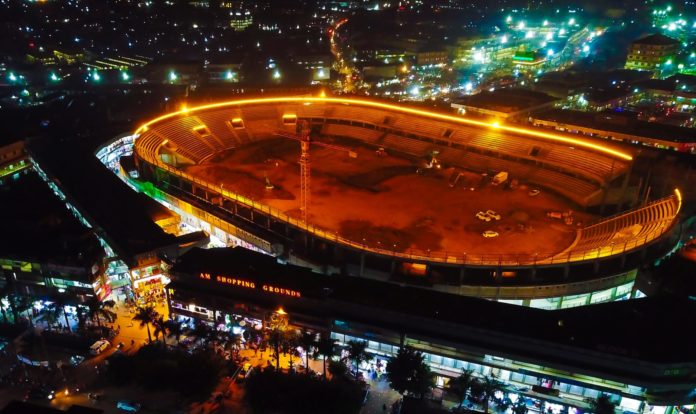 Businessman Hamis Kiggundu, commonly known as Ham, has assured Ugandans that the completion of Nakivubo Redevelopment Project will happen soon.

In a social media post, the proprietor of Ham Enterprises Ltd encouraged Ugandans to involve themselves in the development of the country.

“I personally don’t look at this as merely a sports project but rather a legacy and a realistic illustration to my fellow Ugandans that if I can do it so you can …..Together we can locally develop Uganda as Ugandans within parameters of reason and reality……..for God and my Country,” Ham posted.

Several Ugandans appreciated Ham for the work done as the stadium continues taking shape towards completion.

“Well done Mr Ham, thanks for the big work, development and job creation for youth,” a one Lutaaya Johnson replied to Ham’s post on Facebook.

Kihika Chris also replied; “If Uganda had even if only 10 Hams,I do no no ku do no!!”

“It’s really good for motorcross if the footballers don’t appreciate it give it to motorcross,” Joel Kiyingi said.

“Such a big project being managed by a Ugandan (investor) without any foreign aid. Mukama wamanyi. PROUD OF U MR HAMIS KIGUNDU.  PROUD TO BE A UGANDAN.” Kisakye Vincent replied.

Claire Powerz also replied “Am here to inform all my friends from different countries that this is not Dubai this is Uganda you can visit the Pearl of Africa”.

Ham took over the sports facility for redevelopment in 2017. Initially, the stadium was projected to end in 2019 but the construction of the facility had stalled due to Covid-19 pandemic, politics, court battles and compensation of vendors.