Stella Nyanzi, the eccentric and outspoken Medical anthropologist with Makerere Institute of Research is planning to sue her boss Prof. Mahmood Mamdani over the decision.

An Eagle Online mole at Makerere Hill gathers that the Nnalongo’s (mother of twins) knifing came from “above” (government). Stella Nyanzi is famous for her deep love for former FDC presidential candidate Dr. Kizza Besigye whilst launching scathing attacks at the current regime using her social media platforms.

But she has reportedly pledged to take legal action and sue the Makerere don through an employment court.

‘That will go through the court because she is a government office bearer,’ our mole intimated.

He continues to say that her blunt – and well-written pieces praising Dr. Besigye and calling for social uprising against the NRM government ‘would have caused a reasonable person in a higher office to conclude she was biased and prejudiced against the state which controls Makerere University’.

Nyanzi’s “Making love to the president”, who is “too used to only screwing our nation and its systems and public institutions” is one of the most critical anti-government poems authored in modern times and was commercially censured as a result. 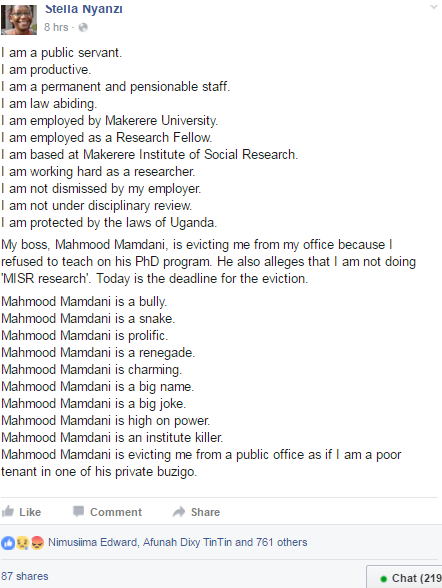 How Nyanzi has taken over social media

Twitter may not be her playing field, perhaps because of Twitter’s tiny window of 140 characters that may not accommodate her prolific writing. We can only speculate, however, as the only place you can readily get Stella Nyanzi is on Facebook. This is where Naynzi takes most of the party to fast-growing following, currently well-over 45,000.

She is candid in her posts, often writing about matters sexual without any inihibitions and at times, dishing out ideas on various other topics, still using sexual metaphors.

The has written powerful letters with clear word graphics, artistically talking about her intentions to make love to the president or threats to burn her womanhood in case certain political scales do not tip in her favour.

That is her kind of style that many people now find more interesting than appalling.

When she is not busy raising dust, Nyanzi is keen on sharing tips and insights on parenting, women empowerment and governance, or sharing travel experiences with her intrigued followers.

An online search reveals she holds a PhD from the University of London based on ethnographic fieldwork of youth sexualities, sexual and reproductive health in Gambia.