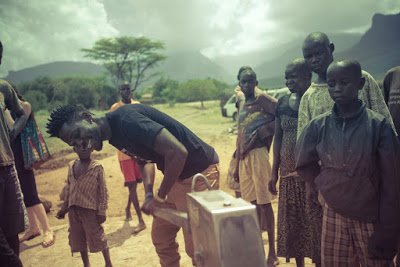 In the same week, the singers went to Firebase Studio in Kamwokya, Kampala, to produce a song promoting safe water and sanitation, and they also filmed a music video, both of which are being released today, Friday May 13th, in all four of the artists’ countries and beyond.

Sema was recorded by Firebase’s Dan Magic on a danceable urban/world-music style track created by German producer The Ghanaian Stallion. It features five back-to-back verses by artists who are all stars in their own countries: Octopizzo (Kenya), Maro (Uganda), Bobi Wine (Uganda), Knackeboul (Switzerland) and Megaloh (Germany).

Sema carries a messages of social advocacy, African pride and the importance of access to clean water and sanitation. It includes 5+ languages, a global mix of musical styles, and is intended to reach an international audience of Viva con Agua supporters and beneficiaries.