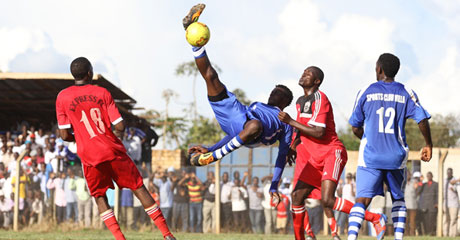 Rwanda Premier League side AS Kigali are understood to have concluded a two-year deal to sign Ugandan striker Karim Ndugwa from SC Villa – for a sign-on fee in the region of UShs 20million.

Ndugwa replaces celebrated Rwanda international Sugira Ernest who during the 2016 CHAN tournament in Kigali three goals and inspiring the team to their first ever knockout stage in the biennial showpiece. Sugira has moved to Congolese side AS Vita Club in lucrative move while Villa recruited striker Alex Ssemuyaba, signed from Busujju in the Masaza Cup to cover the void left by talisman.

The 30-year-old’s agent met AS officials led by Team Manager Joseph Nshimiyimana yesterday to discuss personal terms on behalf of the player after the club had agreed a sign-on fee at the end of last week.

Ndugwa is already involved in the Rwandan side’s pre-season training and underwent a medical before putting the finishing touches to the move on Monday night pending an International Transfer Certificate. The other top signing for the Kigali moneyed side is Kabange Twite formerly of APR FC (Rwanda) and FC Saint Éloi Lupopo (DRC).

Ndugwa is a celebrity in Nairobi after he produced a heroic performance in goal as trouble ridden AFC Leopards edged out Sofapaka 1-0 in a Kenyan Premier League (KPL) match at Nyayo National Stadium last June.

And while it was widely reported that SC Villa asked Ndugwa to get a club where he would be loaned to, EagleOnline understands the Ndugwa’s status is actually free-agency considering he was one of the seven players’ contracts terminated by the club boss Eng Ben Misagga for what the club describes as “indiscipline.”

Ndugwa and the other players had in the past however complained about delayed salaries at the club while others claim not to ever have been paid sign on fees.

None of the players who started the season two years back remain at the club that also saw up to 12 players released before the start of last season.

Lawyers for Lawyers call for dropping of money laundering charges against...